Renault Captur review by Express Drives; We put Renault’s new Cross-over through the ringer in Goa to see how it weighs up against the Maruti Suzuki S-Cross and the Hyundai Creta 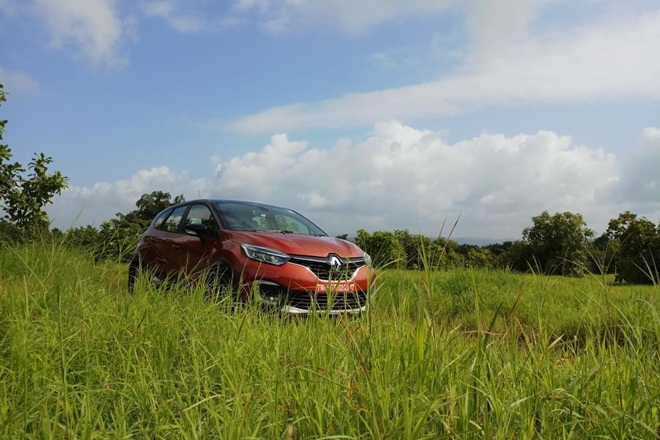 SUVs/ crossovers are the favourite body styles of Indian buyers and it’s no surprise that most new launches these days are within this segment. The latest carmaker to join the crossover bandwagon is Renault with its Captur. While the Captur hasn’t been officially launched in the Indian market yet, expect it to go on sale in the first week of October, making it the fourth vehicle in the French carmaker’s Indian portfolio. The Renault Captur is built on the M0 platform and will be positioned above the Duster SUV. On first glance, the Captur does manage to stand out with its unique styling but there’s a lot more that it’ll need to deliver to become successful. The Captur will also have to go against stiff competition from the Hyundai Creta and the soon-to-be-launched facelift Maruti Suzuki S-Cross. Whether the Renault Captur has enough ammunition to take on the competition and establish itself as a successful vehicle is what we found out in Goa. 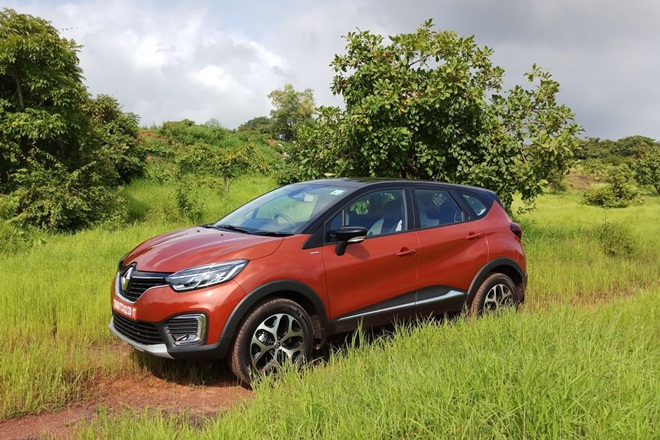 The Renault Captur is an impressive vehicle to look at from all angles and comes across as a premium-looking vehicle. With a curvaceous design, the Captur has a dynamic front, primarily due to the sleek headlamps and the grille. There is a lot of chrome too but thankfully the designers haven’t gone overboard with it and have managed to strike a good balance. The LED DRLs in the lower part of the bumper accentuates the sleek design of the vehicle. 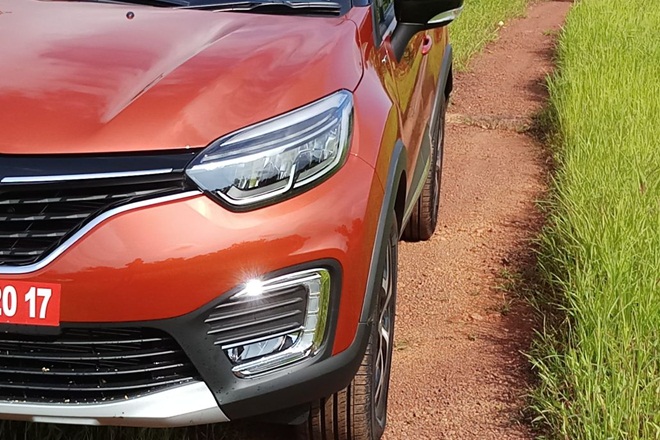 Highlights on the side include a strong shoulder line running from the front wheel arches to the rear and a slightly sloping roofline. The contrasting roof in black is a visual treat and the diamond-cut alloy wheels add further to the dynamic and premium-look. The rear has got tastefully done tail lamps and again a generous dose of chrome without overdoing it. 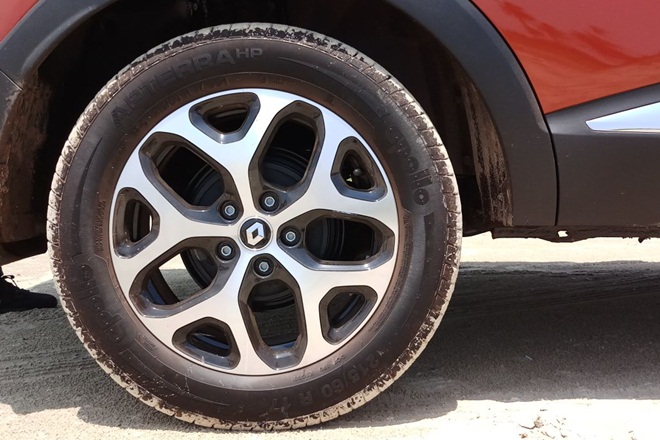 Overall, the Renault Captur has got a raised and dynamic stance along with sleek and modern styling. Positioned above the Duster, the Captur doesn’t have the boxy looks of its sibling but the growing crossover market is a clear indication that if the styling strikes the right visual chords, people will buy it. In a nutshell, the Renault Captur is the most striking vehicle in its segment presently, which will go a long way in convincing people walking into a Renault showroom. 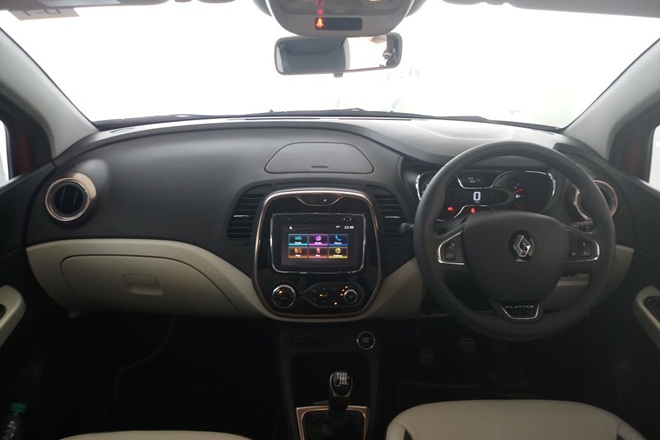 Renault Captur has a pleasing and modern cabin design, which will appeal to a wide section of buyers across age brackets. The dual-tone dashboard is put together well and feels it would last for ages. Ergonomics are spot-on and reaching the controls is an easy task. The centre console has a touchscreen infotainment system, which offers navigation, Bluetooth, FM, AUX-in and USB connectivity. The touch response is fluid with no lag and the map display, in particular, is good as upcoming intersections are clearly shown. The system also keeps a track of the speed limits on roads and gives an audio and visual prompt when exceeding the limit. 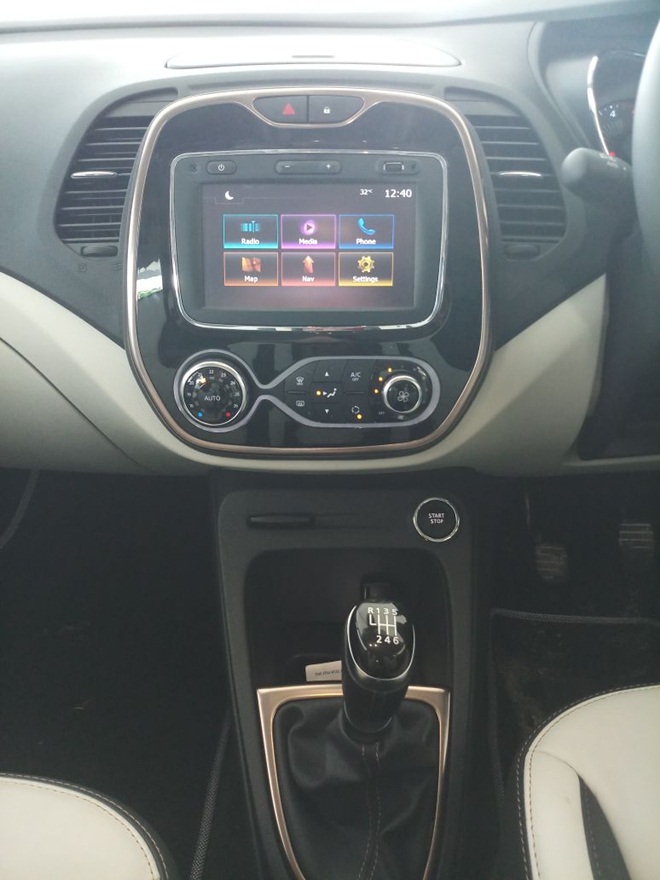 There are enough spaces inside the cabin to place bottles, wallet and phones, adding to the convenience. Being the longest and widest car in its segment, the Captur offers good space for occupants. Rear legroom is good and headroom too should be fine for most people but those taller than six feet might find their heads brushing against the roof. Front seats offer good support, especially on the sides and the rear seat too is comfortable with good under thigh and shoulder support. The only area where I did find a scope for improvement is the plastic quality, which isn’t the best in the segment. That said, it doesn’t feel cheap to touch but with a stunning exterior design, better plastic quality would’ve been welcome. 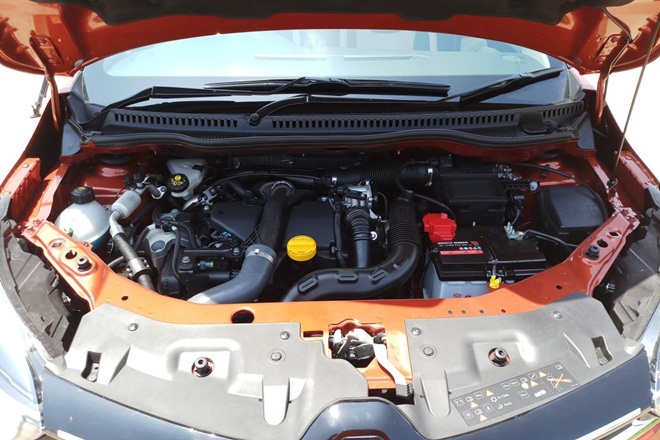 The Renault Captur is being launched only in diesel variant as Renault believes the demand in this segment is primarily for diesel vehicles. Powering the Captur is the same 1.5 litre turbocharged engine that is found in the Duster. With an output of 108 hp, the engine has the adequate grunt to move the vehicle in a quick manner. There’s some lag below 1,500 rpm but past that the engine delivers good acceleration. Reaching triple digit speeds is effortless and in-gear acceleration too is impressive, thanks to the well-sorted ratios of the gearbox. The six-speed manual unit offers easy shifts and couple to a light clutch the Captur is easy to drive in traffic too.

The engine is fairly noisy on the outside but things get quieter once inside. Hard acceleration does let through some diesel clatter in the cabin but at cruising speeds, the cabin is well-insulated from engine and wind noise. Being a short drive, we weren’t able to record the fuel-efficiency but you can expect the numbers to be similar to that of the Duster.

Overall, the Captur offers an engaging driving experience and will appeal to enthusiasts too. A punchy powertrain means that the Captur will strike the right chord with people who love going for long drives and weekend getaways. 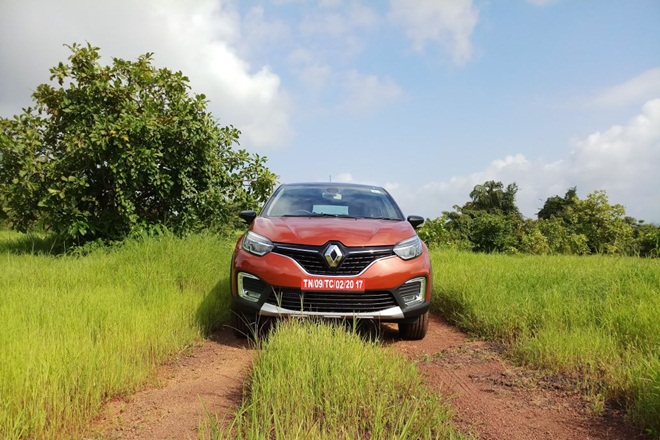 With a best-in-segment ground clearance of 210 mm, the Captur can easily handle bad roads and do a bit of off-roading too as long as you keep in mind that it doesn’t have a 4×4 system. Ride quality is truly impressive and the Captur glides over bad roads and small potholes. At low speed, the cabin remains largely insulated from road undulations and things only improve as speed builds up. This is primarily down to the right balance of the suspension setup as it isn’t too stiff or soft either. 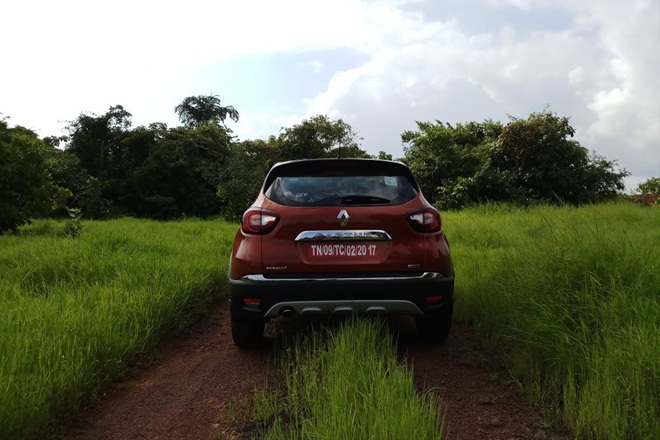 I did expect the Captur to have a lot of body-roll with such a high ground clearance but I was proven wrong on the winding roads around Goa. Body-roll is well-controlled at high speeds too and the stability in a straight line too is impressive. Even over rough patches, the Captur turned out to be stable and we’ll soon upload a video review wherein you’ll be able to see the Captur flying over patches with no roads.

Brakes add further to the overall driving fun and a strong initial bite along with a decent amount of feedback from the pedal means the driver always feels in control of the vehicle. The steering too offers a good amount of feedback and when you add all of these factors, it becomes clear that the Captur is a vehicle you can have a lot of fun with for a long time.

Renault has loaded the Captur with an impressive set of safety features, which are at par with the competition. Dual-front airbags and ABS with EBD are standard across the range and the top variant comes with front and side airbags, Hill start assist and ESP. A reinforced structure is claimed to provide higher safety in the event of a crash. The crossover also gets a reverse parking camera with gridlines and overall visibility too is good, adding to the overall safety quotient. 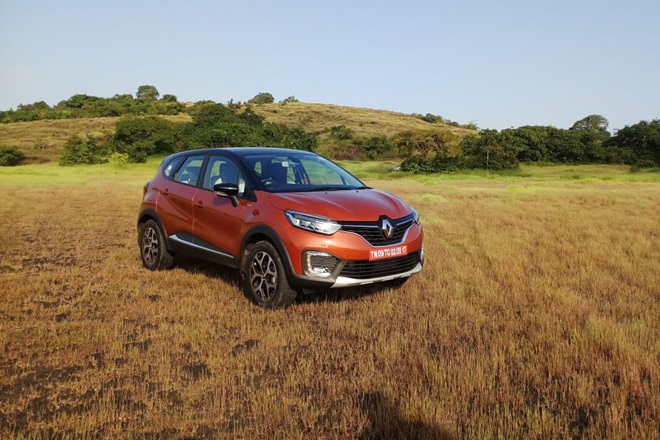 The Renault Captur is an impressive vehicle and will appeal more to buyers looking for a standout design and good driving performance. The vehicle checks all boxes that are required in this segment, translating into a strong foundation for market acceptance. In the end, the price will turn out to be the make or break factor for the Captur. If Renault gets the price game wrong, buyers will quickly dismiss the vehicle as competition is strong in this segment. However, if Renault Captur can undercut the Hyundai Creta, there is a strong chance of the crossover being successful, especially in urban areas. An ideal price range will be to start at under Rs 9 lakh and top off at under Rs 14 lakh. It’s only a matter of days before the Renault Captur is launched so stay tuned to this space for more action.