Or does it take it a step further? Datsun’s RediGo’s smart tall-boy design, along with a likely price tag that will severely undercut the rest of the automatic small car competition? Find out more in our quick review of the Datsun Redi Go 1.0 l AMT! Datsun’s Redi GO in many ways was the first Datsun that made a connection with the Indian people. Breaking the monotony of low set rooflines with a quirky tall-boy design that made it appeal to both younger first car buyers as well as people looking for a small comfortable peppy hatch to battle their way through city traffic. It was only natural for Datsun to capitalise on the RediGO’s success by expanding its reach.

First, they gave the Datsun a bigger motor to bring it at par in terms of power with the likes of the Alto K10 and the Kwid 10 litre. The thing is that in 2017 most city commutes involve arduous hour long drives through start-stop traffic. This is something that could only be done with an automatic, for Datsun, it became all the more essential considering that the Alto K10 and the  Renault Kwid already get AMT gearboxes as an optional extra. And that explains perfectly well why Datsun would want to add an AMT into the RediGos fleet as soon as possible. Interestingly, Datsun, like, their once removed cousin Renault could have gone with a rotary shifter mounted on the dash and saved a few bucks, but instead, they went with the more traditional centre mounted shifter. With a manual mode thrown in for good measure!

Now the headlines are that despite the fact, this is an entire review, sans the Gearbox e, everything remains the majorly same as the Renault 1.0 l. We drove Datsun Redi GO 1.0 litre in Goa last year, here’s the review. The AMT gets a new single line audio system in matte-grey which replaces the piano black system. Datsun claim that this new system is easier to pair via Bluetooth, although we have used the system on the Datsun Redi GO 800 and didn’t find any issues with pairing.

Onto the gearbox then, the Datsun Redi-Go 1.0 l AMT gets a 5-speed AMT system that Datsun picked up from the Renault Kwid. That is where it ends for shared interests. The Redi-Go’s gearbox is set up for shorter shifts. On the upside this means that the Redi-Go has a punchy initial acceleration, short gears mean that the Datsun gets to 80 kmph really quickly before it starts getting out of breath. However, this very strong bottom end also means that the gear shifts are more pronounced, more so as your foot proceeds deeper in the right side of the foot-well.

The problem with short gearshifts means that while the gearbox is milking all  68 hp from its 1.0-litre engine, there will pronounced rocking as it makes its way to the gears. On our test, the Datsun taught us to time these shifts and gently lift off once the shift is in progress the rocking slightly less pronounced.

Now all of this makes goes away when you throw the Redi GO in manual mode. Once in manual mode, the RediGo’s shifts feel surprisingly sharp, and it even auto-blips down gears marked by a nice sharp rev of the little 1.0 litre motor. On the downside, in manual mode, you quickly realise that the meaty chunk of the power fizzles out halfway through the rev-range and that means you need to keep shifting to stay in the power band, which can get slightly annoying. 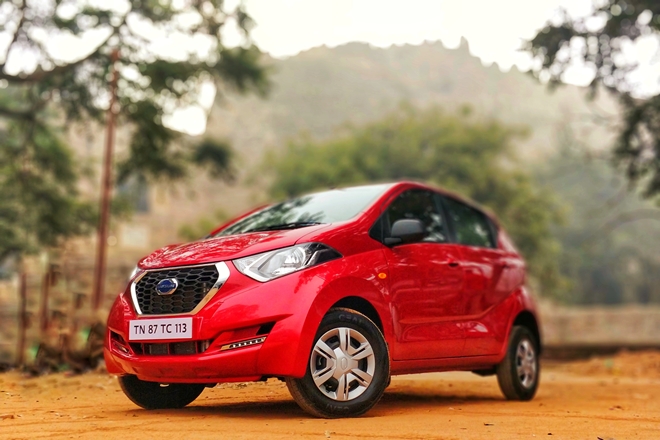 The inclusion of an Automatic gearbox just makes the Datsun more competitive in the terms of the competition, adding one more thing that makes it appealing to urban buyers. In totality the 1.0 Litre RediGo is punchy, and has a great steering at city speeds. In fact, I would even go as far to say that in totality it is a better value proposition than the competition, more so with an automatic gearbox.Once launched later this month, we expect the Redi-Go AMT to be priced close to Rs 4-4.1 lakh (ex-showroom Delhi) undercutting the Maruti Alto K10 by about Rs 10-15,000!