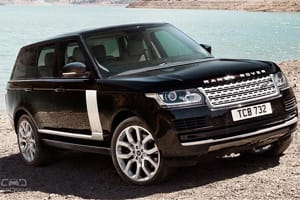 Land Rover recently announced updates for its SUVs Range Rover and Range Rover Sport. The major alteration comes under the hood which enhances the driving experience while the interiors now come loaded with extra equipment. Both the cars are known for their outstanding drivability.

Mechanical changes have been made to the tried and tested 3.0 liter six cylinder TDV6 diesel engine and it now comes equipped with a single turbocharging unit instead of twin-turbo. Although, with this change, the power output remains the same i.e. 281bhp and 61.2 kgm of torque, fuel economy has increased by about 8.5 percent. On the other hand, the SDV6 engine running under the bonnet of Range Rover Sport now sees power increment of 14bhp and extra 10kgm of torque which now totals to massive 302bhp and 71.3kgm torque. The Sports version also sees improvement in the economy department.

Secondly, the inclusion of ATPC, short for All Terrain Progress System, has further enhanced the driving proficiency of the SUVs. This is claimed by the company as the world’s first technology – it is an improved form of cruise control for off-roading. It permits the driver to set-up desired speed that could be anywhere between 1-31kph. The ATPC system smartly manages braking and torque distributed to each wheel, to gain maximum traction on the surface.

Exteriors of both the cars remain intact. The Range Rover shows off large headlight cluster at the front facade which incorporates adaptive xenon lamps with turn indicators, LED fog lamps, atlas radiator grille and the signature insignia sitting above. The side profile boasts of three-line design principle along with base variants getting 19-inch stylish alloy wheels. The top end variants also gets 20-inch five split-spoke alloy wheels. Rear profile is attractive as well with flat windscreen, swept back taillights and LED brake lights.

Range Rover Sport on the other hand looks quite different from its sibling. The front profile has a sleek and aggressive grille with trendy headlight cluster incorporating xenon headlamps and a pair of fog lamps below. The protective cladding beneath the front bumpers differentiates it from Range Rover SUV. The side wheel arches have been bestowed with 20-inch design rims and wider vents with metallic clothing providing affluent character to it. The rear profile is muscular with large boot lid, wide windscreen with stylish spoiler and high mounted stop lamp.

The major exterior change that comes in the new version is the new color options for both. Where Range Rover gets new Yulong White paint job, Range Rover Sport besides getting the said color, will get additional Kaikoura Stone color option.

The Range Rover cars are already known for all-round capability and with the latest updates, the position will be further reinforced in the market.