Car sales up for 14th straight month, surges 13 per cent in Dec

According to the data released by Society of Indian Automobile Manufacturers (SIAM), domestic car sales in December stood at 1,72,671 units compared with 1,52,986 units in December 2014. 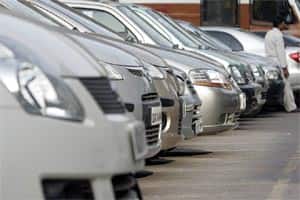 Auto sales: For the top-five players in the domestic market according to April sales, the growth in domestic sales has been 16 per cent yoy, which is highest in the last six months. (Photo: Reuters)

Rising for the 14th straight month, car sales in the country surged by 12.87 per cent in December as customers were induced by the auto industry into buying new vehicles by offering record discounts.

According to the data released by Society of Indian Automobile Manufacturers (SIAM), domestic car sales in December stood at 1,72,671 units compared with 1,52,986 units in December 2014.

“December is always a difficult month for us. But this time, I think the inducement from the car manufacturers in terms of discounts to a large extent has helped in sales growth during the month,” SIAM Deputy Director General Sugato Sen said.

It has turned out to be the best December month ever in terms of passenger car sales, he added.

“With economy improving, sentiments have also improved. Also the reduction in interest rates has helped sale grow to some extent during the year,” Sen said.

When asked about the sales forecast for passenger vehicles and cars in the remaining part of the fiscal Sen said: “Although we don’t give future guidance, but looking at the current situation we expect to grow better than 6-8 per cent. I think we should be crossing 10 per cent.”

Its passenger car sales jumped 14.4 per cent to 37,101 units during December compared with 32,429 units in the same period of previous year.

Homegrown Tata Motors’ domestic car sales were at 6,900 units compared with 9,956 units in the same month previous year, down 30.69 per cent.

“Motorcycle sales have not done well. Products like bikes and light commercial vehicles which are dependent on small cities, rural areas and semi urban areas have been down. Sentiment hasn’t picked up in these areas yet,” Sen said.

Chennai-based TVS Motor saw its scooter sales increase 17.8 per cent at 62,173 units in December as against 52,777 units in the same month last year.