Post extraction, the Chinese driver was rushed to the medical centre. The driver later credited cockpit safety device ‘Halo’ to have saved his life. 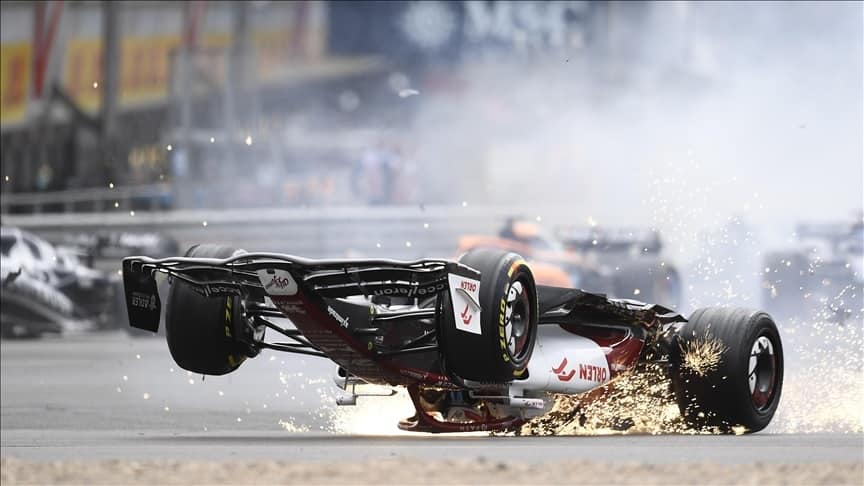 Some might remember the British GP 2022 as Ferrari’s Carlos Sainz’s maiden victory as the Spaniard converted his pole position at Silverstone. The race, however, unfolded a lot more than that. Or should I say, prevented a dreadful episode from unfolding, having left our eyes popped out of our heads.

The race was red flagged in the back of a horrific multi-car collision at Turn 1 as Zhou Guanyu’s Alfa Romeo flipped upside down and went crashing into the barriers at high speed.

Post extraction, the Chinese driver was rushed to the medical centre. The driver later credited cockpit safety device ‘Halo’ to have saved his life.

If it hadn’t been for the halo, the driver could have sustained life-threatening injuries considering the ferocity of the crash. The incident has led us to a question: What exactly is a ‘Halo’?

Worry not, we will explain what it is, its importance in the open-wheel single-seater cars and how it made its way to motorsport.

In literal terms, ‘halo’ means a circle of light shown around or above the head of a saint or holy person to represent divinity. Well, in F1, quite simply, it’s a circular metal tube to protect the heads of drivers.

The halo is a crash-protection, curved titanium bar incorporated in the car to protect the driver’s head during crashes. The device weighs around 9 kilograms (20lbs) and is connected to the car’s carbon fibre chassis on three unions, imparting maximum steadiness.

The round tube, however, affects the aerodynamics of the car considerably. Therefore, the teams have been permitted to fit an aerodynamic fairing around it, which helps them countervail its effects significantly.

Eight-time constructors’ champions Mercedes in 2018 claimed that the titanium bar is strong enough to hold off the weight of London’s iconic double decker bus, which is equivalent to balancing 12 tonnes on a then 7kg metal frame.

Teams in single-seater series were mandated to incorporate halo in their cars in 2018. FIA sanctioned F1, F2, F3, F4, and Formula E are using it in their cars and have had instances where it has served as a life saviour for their drivers, including the one that happened yesterday.

Initially, the titanium-made crash barrier faced fierce and widespread criticism. Some questioned if it will affect the driver’s vision while a few argued that it will prevent the drivers’ smooth exit subsequent to accidents.

While Redbull chief Christian Horner dubbed it as “inelegant solution”, Mercedes boss Totto Wolff went on to take a dig at it saying he’d axe the device with a chainsaw. Fast forward to 2022, the criticism has waned and its biggest critics have prized the invention.

Following the incident at Silverstone, former FIA president Jean Todt heaped praise on halo, which was mandated during his stint.

Incidents like yesterday are a testimony to why a titanium tube went from being hated to being labled an integral part of single-seater car setups.