On that Sunday afternoon in Spain in June 1996, Michael Schumacher produced one of the greatest pieces of driving in a car that teammate Eddie Irvine would later describe as “a piece of junk”. 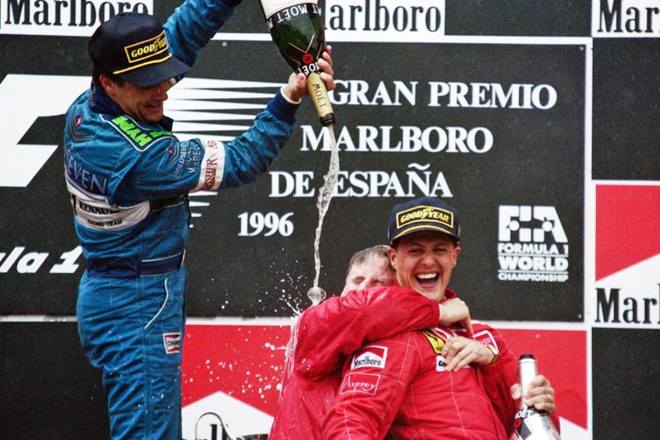 Folks at Formula 1 held a poll earlier this month asking fans which F1 classic would they like to watch. And from the archives came the 1996 Spanish Grand Prix which saw Michael Schumacher grabbing his first win for Ferrari and astounding fans and spectators with his legendary wet weather skills. This was the first of Schumacher’s three wins from that season and is still counted among the best drives Formula 1 has ever seen.

The Ferrari F310 had not been considered one of Formula 1’s great racing machines, however, on that Sunday afternoon in Spain in June 1996, Michael Schumacher produced one of the greatest pieces of driving in a car that teammate Eddie Irvine would later describe as “a piece of junk”.

Schumacher started at P3 on the grid for that race. The performance of the Williams cars of Damon Hill and Jacques Villeneuve had left little doubt that that year’s title would be a teammate duel, with Hill having won four out of the first six Grands Prix.

The hours leading up to the Grand Prix were so rain-filled that there were talks of starting behind the safety car. But a brief let-up in the downpour in the final hour before lights out allowed a regular start.

The start: Both Schumacher and Hill fluffed their lines at the start as Villeneuve took the head followed by Jean Alesi’s Benetton and Hill at third. By the end of the first lap, Schumacher was down to sixth, behind Gerhard Berger and his team mate Eddie Irvine.

Hill’s disaster: Hill’s first 10 laps were a calamity as he went off soaking wet track twice, before spinning coming out of the final corner on Lap 11. His Williams ended up smashed into the pit wall. “To be honest, with these conditions I am almost pleased to be out of it,” Hill reflected, before scampering off to watch the race from the Williams pit wall. “I’m afraid it was a bit of a write-off today.”

Schumacher’s climb: On Lap 12, he both took the lead and almost instantly established a three-second gap over Villeneuve. Three laps later, the gap ballooned to nearly 15 seconds. Schumacher was lapping, on average, nearly four seconds a lap faster than his nearest rival.

A great day for Ferrari: Schumacher was indomitable once he was at the front. He took his first win for Ferrari by a massive 45.302s from Benetton’s Alesi, with Villeneuve third. There were just six finishers by the end. It was a masterclass – and truly, one of the great wet weather drives of all time. “It’s amazing,” said Schumacher in the press conference afterward. “If anyone would have asked me what I would have bet on this, I wouldn’t have even bet a penny.”