A dramatic Italian Grand Prix saw the maiden win for Pierre Gasly allowing Alphatauri to take a home race win again at Monza. Carlos Sainz finished P2 for McLaren and Stroll in P3 as no Mercedes, Redbull or Ferrari on the podium. 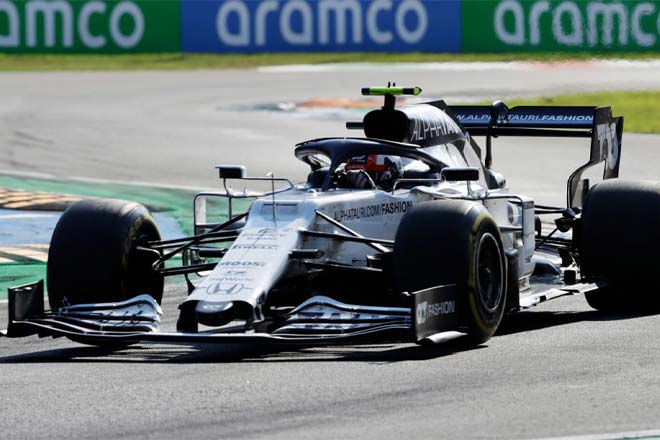 One of the most dramatic races in recent times allowed for a very exciting Formula One race in a long time. The 2020 Italian Grand Prix presented a dramatic event seeing Pierre Gasly taking his maiden win for an Italian team — Alphatauri. Gasly is now the 109th driver in history to win an F1 race, and the first Frenchman to win since 1996. Carlos Sainz finished second for McLaren while Lance Stroll finished third for Racing Point taking his first podium for the team. But the drama began with a Haas retiring and Ferrari crashing. Hamilton to be penalised for an error and allowing distant spectators to an enjoyable and dramatic race.

The race started with the Mercedes cars on the front row. Lewis Hamilton got a good start from pole, while Valtteri Bottas stumbled and began to drop back all the way down to P6 by the end of the first lap.

Then a curveball came in the form of Kevin Magnussen pulling over to the side near the pit entry after an engine issue, summoning the safety car. But the entry to the pitman was closed, and Hamilton pitted under closed pitlane conditions. Once the race restarted, Hamilton was out in front but all other cars behind were out of position. But at the end of the lap at Parabolica (the final corner), Leclerc lost the rear of his Ferrari and suffered a massive crash. Thankfully, Leclerc walked away unharmed. But that brought out the red flag and all drivers were to park in the pitlane.

In that time, Hamilton was awarded a 10-second stop and go penalty. The race was race resumed with a standing restart seeing Hamilton again starting from the front ahead of Stroll, Gasly, Raikkonen and Sainz behind. When the lights went out a second time, Hamilton was in the lead but Gasly got a great start taking Stroll into turn 1.

Stroll dropped back after a poorer start. But Hamilton took his penalty at the end of the lap and was then 30-seconds behind Gasly who was now the race leader for the first time in his F1 career. Although Raikkonen was second, his Ferrari powered Alfa Romeo was down in pace and started to fall back. Sainz got past Raikkonen a few laps after the restart and began his charge to try and challenge Gasly for the lead with victory in sight.

With five laps remaining, Sainz has closed the gap to 1.6 seconds. On the final lap, Sainz even had the benefit of DRS, But Gasly just kept his cool till the very end and help on to the lead and take his maiden win. Sainz has to settle for second while Lance Stroll finished third.

Lando Norris finished P4 while Bottas, after his dreadfuls start, finished fifth. Daniel Ricciardo came in sixth for Renault while Hamilton managed to climb up to seventh place after getting past Esteban Ocon’s Renault. Gasly’s teammate Daniil Kvyat finished sixth ahead of Sergio Perez.

Williams finished 11th with Nicolas Latifi who was ahead of Romain Grosjean in the Haas in 12th. Raikkonen dropped all the way down to finish 13th as George Russell was P14 ahead of Alex Albon in the sole finishing Red Bull in P15 as Antonio Giovinazzi who also pitted at the same time as Hamilton and was awarded the 10-second penalty to finished last in P16.

Vettel was the first driver to retire from the race with brake failure for Ferrari at their home race. Magnussen was the next retirement that was a key factor that led to the dramatic race followed by the second Ferrari of Charles Leclerc crashing out of the race. Max Verstappen was the last car to retire for Red Bull after the team noticed an issue with the car.