One of the most dramatic F1 Grand Prix races in recent times saw Valtteri Bottas take a dominant victory. The pack behind him saw nearly all drivers involved in incidents and saw a total of nine cars retiring from the race. But Ferrari fought back into a podium spot with Leclerc finishing second and Lando Norris claiming his maiden podium. 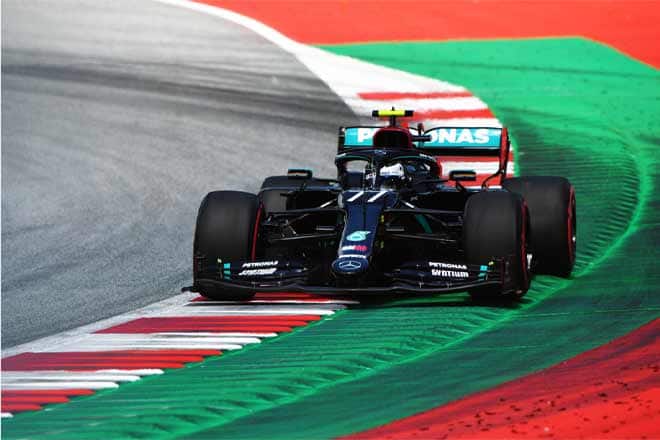 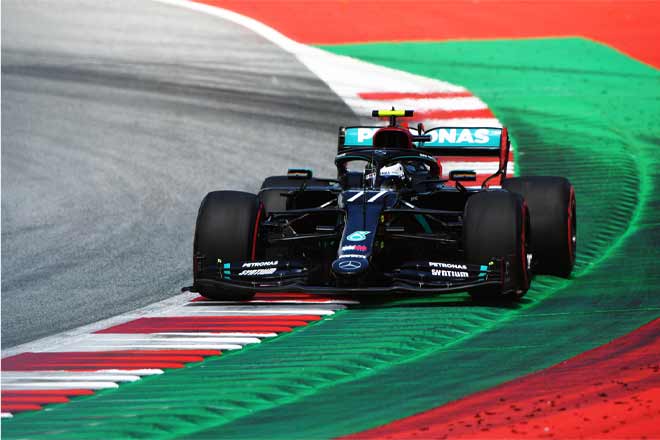 After a delayed start to the season due to the coronavirus pandemic, the world of Formula 1 was eager to get started. But the first race of the season showed that the wait was well with it. It was Valtteri Bottas who took a dominant win for Mercedes in the incident-packed 2020 Austrian Grand Prix. But it was Charles Leclerc in the Ferrari who was awarded second place and Lando Norris claimed his maiden F1 podium for McLaren. Lewis Hamilton although crossed the line second in the Mercedes behind Bottas, his 5-second penalty added to his final race time classified him fourth.

As the lights went out, Bottas got off to a dominant start and started to build a hefty gap over the pack being led by Max Verstappen on the medium tyres in the Red Bull. But by lap 11, Verstappen was forced to retire with mechanical issued on his car. Hamilton had climbed up the field to second place and second Red Bull driver Alex Albon seemed prepared for the maiden podium after it was denied in Brazil last year following contact between him and Hamilton during the race.

Then on lap 27, Kevin Magnussen’s Haas suffered a brake failure, but the Dane managed to not cause any damage to his car in the runoff area, but it brought out the safety car. This opened the pit window for all to switch to a new set of tyres. After the safety car pulled in on lap 30, all drivers got off incident-free. But at the top of the hill at turn 4, Vettel tried to go on the inside of Carlos Sainz’s McLaren which was battling with Leclerc’s Ferrari. But Vettel’s move was quite optimistic and contact between his Ferrari and the McLaren spun the German and dropped him to the back of the pack.

While the two Mercedes cars, with Bottas in front, created a hefty 10-second plus gap over Albon. They were both advised to stay off the kerbs as they were reportedly causing issues with the sensors on both cars forcing them to slow down.

Soon after, George Russell, who was pipped for a decent finish for Williams, was forced to pull his car over to the side due to reliability issues. This brought out the safety car for the second time in the race neutralising the field yet again and cancelling out the gap between the Mercedes and the Red Bull of Alex Albon.

But on the restart, Kimi Raikkonen’s front right tyre came straight off the car leading to the safety car to come back out for a third time to clear the Alfa Romeo. Raikkonen was the seventh retirement from the race.

This game Albon a second chance at challenging Hamilton for second place as both Mercedes were being cautious with their cars. But the young Red Bull driver again made contact with Hamilton and spun out leaving him to drop out of the race and eventually retire later on. All of this drama played perfectly into the hands of Ferrari, with Charles Leclerc finding himself in fourth. On lap 66, Leclerc made his move on Sergio Perez at Turn four to move up to third. Then Lando Norris in the McLaren managed to make his way past Sergio Perez and up to fourth-place.

Then Hamilton was awarded a 5-second penalty for causing a collision with Albon meaning that despite him crossing the line second behind Bottas, he was classified fourth with Ferrari recovering superbly and the hero of the day was Lando Norris claiming the first podium of his career with a third-place finish.

Only 11 drivers finished the race with Hamilton classified fourth, Sainz in fifth, Perez sixth, Gasly seventh, Ocon eighth, Giovinazzi ninth and Sebastian Vettel claiming the final championship point in 10th ahead of rookie Nicolas Latifi in the Williams who finished 11th. Following Verstappen’s retirement, Ricciardo and Stroll both retired with engine issues, while Magnussen and Grosjean both suffered brake issues in the Haas cars. With George Russel and Kimi Raikkonen also retiring, Albon retired after his incident with Hamilton and the final retirement was the Alpha Tauri of Daniil Kvyat with a failed suspension.