The second and third place on the podium were secured by Marco Bezzecchi and Maverick Vinales, respectively. 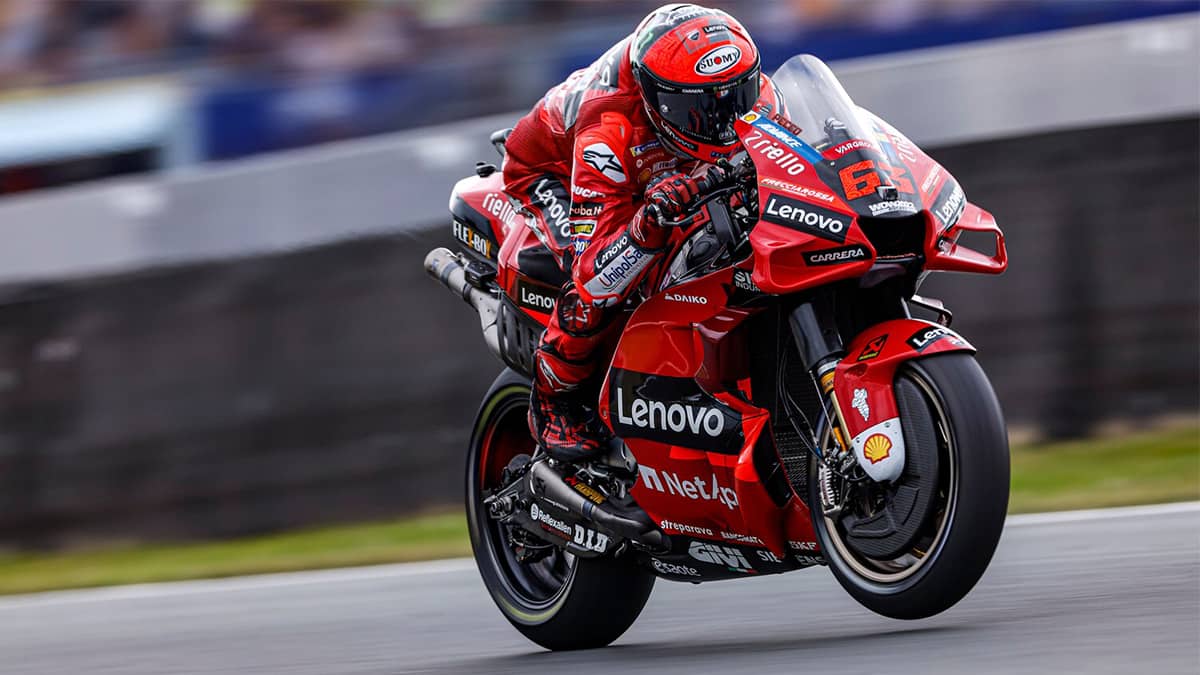 As if the heat in Delhi was not enough to make me sweat, the final race before the summer break was filled with some rare scenarios as Fabio Quartararo made an error and crashed twice, Marco Bezzecchi won his first podium in MotoGP and Aleix Espargaro made a jaw-dropping last-second overtake to finish in P4. His teammate finished on the final step of the podium after suffering a DNF due to a mechanical issue with his ride height device in the last race.

Aleix got a great launch off the line while Fabio failed to pounce to P1 from his second-place start. The French rider did try to make a move on race leader Francesco Bagnaia in the very first corner but was a little too aggressive and instead lost out on a few places as he ran wide. Joan Mir was at the centre of two incidents at the starting gird. The first one happened after the warm-up lap when Mir stopped at his designated spot and made contact with Miguel Oliveira who was passing him. Then at the start of the race, Mir’s GSX-RR veered a little too much to the left and hit Luca Marini who dropped further back.

Another rider that seemed to be off the pace was Johann Zarco. The Prima Pramac Ducati rider is third in the world championship standings but was not really able to hold the fight against the other riders. Although he started the race in P7, he crossed the finish line in P13. His teammate Jorge Martin also had a similarly disappointing race. Martin started on the front row but was the seventh rider to cross the finish line.

Also Read
Sebastian Vettel announces retirement from F1, here is why
Fernando Alonso set to replace Sebastian Vettel at Aston Martin
Buying a Volkswagen track-day car and maintaining it: What does it take & how much does it cost
Hero MotoSports to compete in Dakar 2022 with Two-Rider Squad: Details

This was a fabulous weekend for Francesco Bagnaia and the win certainly brought in the much-needed confidence boost for the Italian rider. Pecco had not been able to finish the last two races, something that really hurt his chance of competing for the world championship title. He displayed great pace in Qualifying to start from pole and then converted that pole into a race win by staying ahead of the pack for the entirety of the race.

The most dramatic moment of the race came during the fifth lap as Fabio Quartararo, running in third place, tried to make a move on Aleix Espargaro. The French rider was getting closer and finally decided to take the inside line at Turn 5. However, Fabio could not control the front of his R1M from sliding. Not only did he fall, but he also hit Aleix and pushed him into the gravel trap. Thankfully Aliex managed to keep his bike the right way up and rejoined the race but in P15. Fabio also picked up his bike and resumed his race, albeit in last place. The defending world champion tried to fight with his machine and carry on with the race but had a nasty high-side at Turn 5, a few laps later, ending his race. Two other Yamaha riders Franco Morbidelli and Darryn Binder also crashed on Lap 6, leaving only Andrea Dovizioso who finished outside the points. Altogether it was a day to forget for the Japanese manufacturer.

Aleix Espargaro, however, had a completely different result. After the incident with Fabio, Aliex took a few laps to get back into a rhythm and then launched an aggressive assault on the riders ahead. He climbed his way from P15 to P6 and things looked like they would settle there. But just as he was heading into the Timmer chicane on the last lap, he made a heroic overtake on Jack Miller and Brad Binder in one go. While he might have finished in fourth place, he definitely got the attention of a podium finisher.

The incident between Fabio and Aleix gave rookie Marco Bezzechi a chance to finish on the podium, his first ever in MotoGP. The Mooney VR46 rider was already putting up a good fight, partially thanks to his soft compound rear tyre. He tried his best to chase down Pecco and maintain a good distance from Vinales behind him. Vinales himself had been in fine form the entire race and rode like he had his eyes on the prize.

Pol Espargaro did not compete in this race after he sustained some injuries in Germany and Marc Marquez is out for the foreseeable future as well. Of the remaining two Honda bikes on the grid, Takaaki Nakagami finished in P12 while Alex Marquez finished just inside the points. He was just behind Fabio Di Giannantonio of Gresini Racing, who will be his partner in the next season. Alex will be replacing Enea Bastianini, who did not have a very successful race either and finished in 11th place.