These announcements have come at a time when the Indian government is actively pursuing renewable sources of energy and has announced fresh packages for electric vehicle adoption. 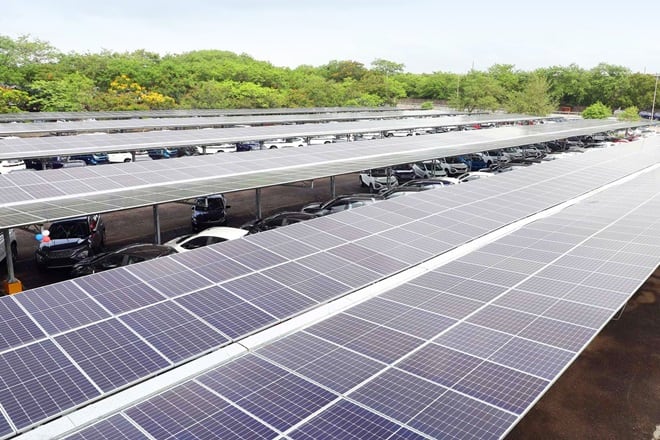 Reliance Industries’ Chairman Mukesh Ambani made quite an ambitious statement about starting work on making batteries, hydrogen fuel cell plants in India. The location selected is Jamnagar, the very place from where the Ambanis first started their business. Mukesh said that 5,000 acres of land has been earmarked in Jamnagar, Gujarat wherein the Dhirubhai Ambani Green Energy Giga Complex will be made. The investment for this project is Rs 75,000 crore and this amount will be spent over a period of three years. Mukesh said “We have started work on developing the Dhirubhai Ambani Green Energy Giga Complex on 5,000 acres in Jamnagar. It will be amongst the largest such integrated renewable energy manufacturing facilities in the world.” Along with these aforementioned factories, other projects include a green hydrogen-making electrolyser. Solar photovoltaic module factories too are a part of this plan. In short, self-sustainable energy resources for use in EVs and more.

In all four Giga factories will be made. This New Energy Business will also provide employment to a huge number of individuals. Mukesh also added that two additional divisions will be created –  Renewable Energy Project Management and Construction Division, and Renewable Energy Project Finance Division. The company also plans to harness 100GW of solar energy by the year 2030.

These announcements have come at a time when the Indian government is actively pursuing renewable sources of energy and has announced fresh packages for electric vehicle adoption. One of the major hindrances amongst EV buyers was the charging infrastructure. It is but natural that RIL might also want to get into making EV chargers and setting them up at strategic points around the country or perhaps selling them to boot-strapped organisations. Moreover, India-made EV batteries mean that one will not have to shell a higher price. As we are aware, in an EV, more than 40 per cent of the cost is due to the battery pack. Li-ion battery cells are usually imported and then assembled in India, thereby increasing the cost factor.

The Indian government has also been pushing hydrogen fuel cell vehicles. While there are none in India so far, hydrogen fuel cell vehicles have been developed for many other countries by a few of the carmakers present in our country. With RIL setting up a green hydrogen facility, it will accelerate the development and thereon the adoption of such vehicles in India. With each state coming up with its own incentives for electric vehicles, most noticeably Gujarat recently, the access for the general public to buying EVs has become much easier. The recent plea to include hydrogen fuel cell vehicles into the FAME-II purview too has been met with a positive response so far.

Bhavish Aggarwal, Chairman and Group CEO, Ola, said “India’s EV revolution is coming. From Karnataka in 2017 to Gujarat just this week, 21 states and UTs are now incentivising EVs to make them affordable. We are committed to accelerating this with the Ola Futurefactory and our Ola scooter that’s coming soon.”

Sohinder Gill, CEO Hero Electric said, “It’s a big move by the company that will address the clean energy requirements for the EV industry in future . The development is completely in sync with the industry’s agenda and mission of ‘end to end’ cleaner Mobility, using energy that is non-polluting and from the renewable sources. Electric vehicle would dominate the automobile market in future and we at Hero look forward to the participation of such leading business houses in making India a global EV hub”

Mohit Arora, Associate Director – Automotive, IHS Markit said, “RIL is known to tap on industry disruptions, this time it is on clean energy production and storage. The investment amount announced is substantial and the target looks ambitious but it is in line with the new energy policies the world and India is expected to move in, this shall also act as a catalyst in adoption of green energy. I can also think of more benefits like job creation giving a boost to Make in India. I am sure RIL should have a strategy in place to scale it for mass adoption at affordable costing.”

Gunjan Malhotra, Director, Komaki Electric Vehicle Division, said,” At a time when the fuel prices in India are hovering at their all-time highs, a large investment in green energy initiatives comes as music to our ears. We are at the cusp of a massive migration from traditional IC Engine-powered vehicles to electric vehicles which will itself require the setting up of charging infrastructure on a national scale. This infrastructure is expected to come up after about 5 years which will undoubtedly cause a significant rise in the power demand.

India’s power consumption per capita is currently only one-third of the global consumption (1181 kWh against the global 3260 kWh). There is enormous scope for improvement in developing countries such as India wherein continuous development and growth will drive the need for more and more power. Powering the nation with renewable energy sources is the need of the hour and this step will even put India in global contention as one of the largest manufacturers of green energy parts.”

We’ve also checked with other manufacturers and are awaiting their response on this new development.