India’s youth must lead the effort to decongest our roads, here’s how

With rising incomes and car ownership being seen as a status symbol in India, the odds are stacked against policymakers trying to find solutions to this problem. It is widely acknowledged that Indian cities are increasingly becoming congested and unliveable. Our biggest metros – long considered the engines of growth, melting pots of diverse cultures, and vanguards of prosperity – are now ranked among the lowest in the world on quality of life indices.

Stories of people spending 3-4 hours in daily commute are not uncommon, and have now, unnervingly, become a part of the daily saga of life struggle for many people. The internet is flooded with memes of people stuck on the Delhi-Gurgaon border gesticulating aggressively, or Bengaluruians feeling afraid to step out of their houses and of Mumbaikars trying to find unique ways of using their time on crowded trains and taxis. And while one may laugh this off as another thing that is uniquely Indian, our lack of attention to the problem of commute in Indian cities can have very real and unfortunate implications for economic growth, productivity, environment, and mental health. With rising incomes and car ownership being seen as a status symbol in India, the odds are stacked against policymakers trying to find solutions to this problem.

Some commentators have called for greater investments in road infrastructure, but widening roads has never been the solution to reducing congestion – not here, and not anywhere in the world. If we expand roads, additional traffic sweeps in to fill the extra space. In economic theory, this phenomenon is referred to as induced demand – the idea that once supply increases, the suppressed demand for a good resurfaces and more of it is consumed. This is especially seen in the case of transportation systems and is often used as an argument against increasing road capacity as a solution to congestion. The experiences from the highway building program of the 1930s and the 1940s in New York and the Manchester Motorway Box in the UK attest to this fact. The decline in traffic, if any, is only momentary.

While new tech-enabled transport solutions such as Uber and Ola have helped in reducing congestion by reducing vehicle ownership, these alone will not suffice, nor are they affordable for all classes of people. The need of the hour, therefore, is investment in and the use of public transport. What we require for this to work is a conscious effort by people to switch their mobility preferences. While this will be cumbersome in the short term until good (and frequent) connectivity is fully established, the switch will help in increasing the volume of traffic to make investments in public transport viable while also increasing pressure on governments to do more.

Cities across the world have invested heavily in strengthening public transport systems as well as walking and cycling infrastructure. The metropolis of London housing 8.3 million people covers an area of 1,572 sq. km and it is serviced by a dense network of buses and metro (Tube as it is popularly known). London has over 7,500 buses and 402 km of metro length that helps move roughly 9.6 million people on a daily basis. In comparison, Delhi – which is relatively very well served in the Indian context – houses 26 million people and is serviced by a little over 6000 buses and a metro length of 389 km. In terms of provision of public transport per 1000 people, the difference is staggering. It’s no surprise that the gap is filled through the use of personal vehicles.

However, there is hope. Most young people today have been sensitized to environmental issues in school; they have also grown up looking at environmental degradation as a real possibility in their lifetimes. As a result young people around the world have been at the forefront of campaigns to adopt sustainable lifestyles. Examples of Greta Thunberg’s activism speak to the power of young minds to shape the narrative around sustainability. 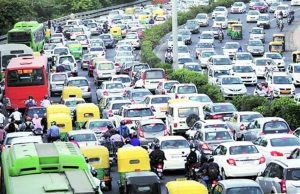 And undoubtedly, they have the largest stake in the matter. The economic and social cost of over-reliance on private vehicles in our transport systems is immense for everyone, but more so for the youth who are just starting out to explore their personal and professional journeys. Congestion in our cities is forcing people into hard choices and making it increasingly difficult for them to enjoy well-rounded meaningful lives. There is an increasing tussle to manage the time spent in traffic; we are being forced to choose between opportunities for growth and living in cities that offer a better quality of life, the mental space to learn new skills and time to form deeper relationships.

It is therefore important that the youth take on the responsibility of driving change within their cities. It’ll have to start with them, with them changing their lifestyles to resist the lure of private vehicles, setting an example for others to follow and pushing their governments to do more for public transport.

Author: Rohit Kumar is the co-founder of Young Leaders for Active Citizenship (YLAC). YLAC is a member of the Sustainable Mobility Network, a collective of organizations working together to reduce congestion and vehicular pollution in Indian cities.