Japanese automakers are leading overall in filing patents in India. However, among the indigenous brands, TVS Motor Company has been the filing more patents than Tata Motors and Mahindra & Mahindra. In recent years, automotive patent filings in India has seen a steep rise. Many automotive companies, indigenous or foreign, have recently begun filing patents for new forms of technologies in India. Sagacious IP, the global intellectual property research and consulting firm, has released the data for the top 20 automotive companies, which are frequently filing patents in India. The data shows that Japanese brands have taken the lead in this space. However, among Indian automakers, TVS Motor Company is the one filing the most number of patents. The data shows that Toyota, Nissan, Suzuki, Honda are the leading international companies who are registering their intellectual properties in India. German automaker – Daimler and the automotive component giants — Bosch are listed in the top ten names.

The number of patents being filed in India by these companies has witnessed a steep rise this past decade. Since 2014, Daimler’s filings saw over 400% increase. These contribute to a share of around 3.6% of total filings done worldwide by the company between 2014-2018. For Bosch, its Indian patent filings also saw a similar increase with them accounting for upto 1.8% of total filings in the same period of time. Toyota has seen a 60% increase, while Nissan’s patent filings in India saw them increase by 170%. 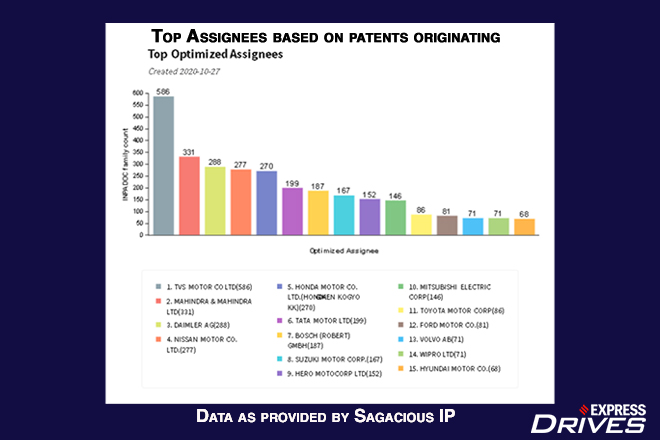 Most of these may be global patents, being co-registered in India. However, among the patents originating from India, the indigenous automaker — TVS Motor is leading the charge with significant a margin.

In second place is Mahindra & Mahindra with the Indian arms of Daimler AG following in third. After Nissan and Honda, Tata Motors is another Indian company also a part of the top ten filing patents regularly. Other automakers like Ford, Toyota, Volvo, Hyundai, along with two-wheeler makers — Hero and Suzuki, all make the top 20 list. Global numbers show that the Toyota Motor Company files the highest number of patents worldwide. Beijing Automobiles, Ford and VW are close behind. 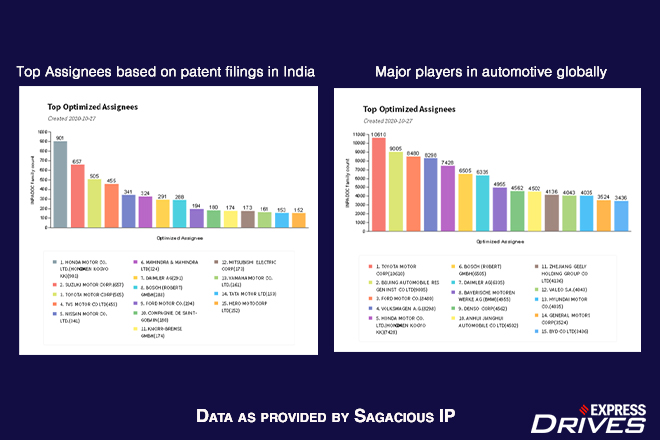 Why the rise in automotive patent filings in India?

The survey by Sagacious IP suggests that patent filings originating from India in the last 4-5 years have seen over a 100% increase. Sagacious IP claims that a majority of the patents are in IPC/CPC patent classification of B60R. These relate to vehicle fitting or parts like occupant injury prevention systems, pedestrian injury prevention, preventing unauthorised use or theft of vehicles, arrangement of batteries, electrical systems & optical viewing arrangements.

The nature of these patents is fairly in line with the direction the automotive industry is moving towards. Even in India, autonomous driving vehicles, or autonomous drive features, safety features as well as electric vehicles are the future and the industry will see a transition soon.

Many auto companies have set up global technical centres in India, namely – Nissan, FCA, Volkswagen Group among others. These centres are working to not only create technologies that suit Indian needs but also cater to global demands.

What is helping India emerge as a hotbed for automotive patents?

Sagacious IP claims that the last amendments to the Patent Rules, 2003 saw the reduction in patent filing fees. It has been a major factor in the rise in patent filings. The proposal to reduce the cost of patent filings from MSMEs and Startups to Rs 1,600 from currently Rs 4,000 is expected promote filings and thus innovation further. Additionally, the e-filing system with digital documentation, simplified refund process and ease of deletion of filings has also made the process smoother. While a faster examination process has been another key reason for the same.

However, some challenges still need to be addressed. Sagacious IP believes that public awareness about the economic, social and cultural benefits of intellectual property rights among all sections of society needs to be worked upon. Additionally, to stimulate the generation of IPRs with a strong legal and legislative framework with effective IPR laws are required to be put in place. These laws would have to balance the interests of the owner’s rights with larger public interests as well. Sagacious IP also suggests commercialising IPRs, while also strengthening the enforcement and adjuratory mechanisms for combating infringements. Furthermore, teaching, training, research and skill building in IPRs should be promoted through institutions.