From providing daily commuters last-mile connectivity to the metro stations to offering hyperlocal delivery, electric rickshaws today can do it all! What has inspired their evolution and high adoption in India? And where are electric rickshaws going? 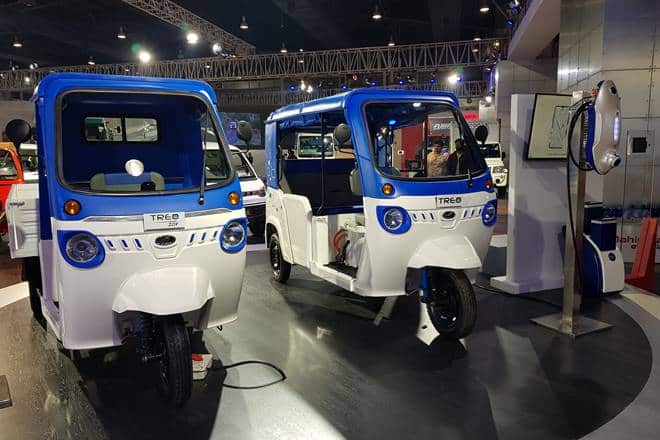 India’s e-mobility transition is spearheaded by small vehicle segments, particularly, the ubiquitous electric rickshaw. The e-rickshaw is the preferred mode of last-mile commute for office goers, especially in and around metro routes and highly populated pockets. Overall, India is home to 1.5 million battery-powered electric rickshaws, catering to over 60 million users every day, for whom affordable mobility is critical. E-rickshaws not only form an important part of the mobility ecosystem in tier II and III cities like Lucknow, Varanasi, Dehradun, Ranchi, Patna, and Udaipur but also are an eco-friendly last-mile commute option for Tier I cities like Delhi, Noida, and Gurugram.

India’s fleet of e-rickshaws is much larger than all the electric cars sold in China since 2011, and second only to China’s massive fleet of electric two-wheelers. Notably, the economic slowdown has not affected the manufacture and sale of e-rickshaws much. As many as 11,000 electric rickshaws are sold every month in the country today, as against the 4,000 electric rickshaws that were sold in all of 2010. While 98% of the electric rickshaws have been sold in the unorganised market, safety and import regulations of the 2010s have created a level playing field for all, evident by the emergence of organised manufacturers such as Kinetic Green, Hero Electric, Mahindra & Mahindra, Bajaj, Piaggio, Lohia, Gayam Motors, and others.

What is driving the growth of this vehicle category? The low upfront cost compared to an auto-rickshaw, increased affordability for commuters, and higher speed compared to the cycle rickshaw – all constitute the value proposition of electric rickshaws. The running cost for an electric three-wheeler is only Rs 0.4/km as compared to Rs 2.1-2.3/km for the conventional ICE-based rickshaws. Coupled with purchase incentives from the government, electrification of rickshaws based on diesel, petrol, LPG and CNG is truly a low-hanging fruit for the country. Apart from a high economic impact, e-rickshaws also have a positive environmental benefit with zero tailpipe emissions. Additionally, the average energy consumption of electric rickshaw is 53.76 KJ/passenger/km which is one of the most efficient among all forms of motorised transport.

No wonder, India’s highest authority on automotive research, ARAI, strongly recommends converting three-wheelers to electric as the best way to promote EVs in India. E-rickshaws are ideal for crowded cities where big electric buses are not the solution. These are also driving the electrification of mobility solutions in India’s hinterlands.

SMV Green Solutions in Varanasi are empowering former rickshaw pullers – both women and men – to steer a green revolution on Indian roads. At a conservative estimate of 3.5 million three-wheelers in rural and urban India, the electrification of this most visible vehicular segment will help India’s masses experience EVs daily and also reap from the manifold benefits of electrification.

A throwback to the last two decades reveals how India’s jugaad innovation of the early 2000s brought electric rickshaws that use lead-acid batteries. The battery of this low-cost electric rickshaw with no proper warranty needs to be replaced every 6-9 months. These electric rickshaws are sometimes charged at night by illegally connecting to the power distribution lines, thereby affecting the revenues of the already fragile power sector. Improper charging has led to rackets of power theft leading to an annual loss of around INR 150 crore, for DISCOMS in Delhi alone.

In 2017, India saw the birth of rickshaws using Lithium-ion batteries. These are far more efficient, sustainable, and economical for users of the vehicle, and beneficial to the country as a whole. For one, e-rickshaws using Lithium-ion batteries have catalysed India’s deployment of advanced energy storage systems critical for the growth of renewable energy integration in the country. New business models too are emerging with the increasing uptake of this technology.

Brij Mohan, 44, an electric rickshaw driver who charges his vehicle at a battery-swapping station in Gurugram says, “Earlier, I used to drive a cycle rickshaw – the effort was more and money was less. Electric rickshaw has made my life easy. By using a battery-swapping station’s services, I get a charged battery within minutes. I don’t have to sit/ sleep in my rickshaw for hours together during the time it takes to charge, just to safeguard my battery against theft. I now have more time for customers, and additional time to spend with my family.”

Amendra Mishra, 37, another electric rickshaw driver from Gurugram, says, “When the battery is operated and managed by a third party it becomes convenient for us as we just need 2-3 minutes to replace the used battery with a fully charged one. This is something that was not available for us earlier while using “paani-wali battery” i.e. lead-acid battery.”

Also read: How car rental could be your new safety move against COVID-19 after lockdown

Overall, India’s quest for sustainable mobility brought the first wave of electric mobility in the form of the unregulated and unplanned e-rickshaws using lead-acid batteries. The same quest coupled with technological advancements and the right policy push is positively disrupting India’s EV industry. Battery-operated e-rickshaws have a transformative effect on not just India’s mobility landscape but also across industries such as power, battery manufacturers, automotive industry, in addition to impacting the environment positively. Indeed, e-rickshaws are the present and the future of the EV revolution in India.