While the R-SUV will just be a basis for research, the real deal is a micro e-scooter that will not only have a higher battery range but will be affordable as well 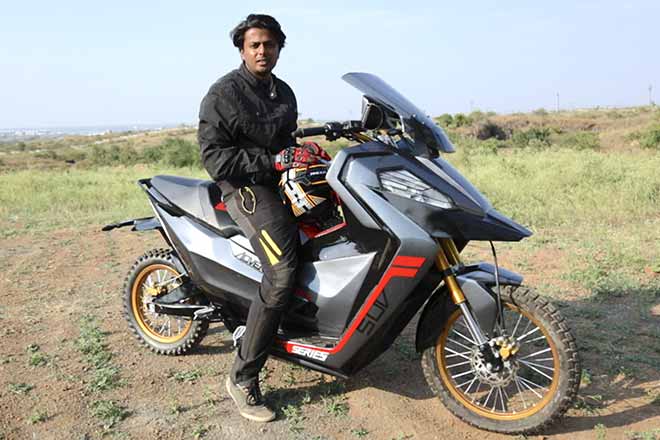 Electrics. A decade ago, there were notably only a few names that will come to mind. Nowadays, they are dime a dozen. In this already crowded space, you see the addition of at least 2-3 new names daily. In comes another fresh player. A few months ago, Gugu Electric did send out press releases detailing out their plans as well as the images of the electric two wheeler SUV. Yes, that sounds a bit weird. Especially if you think its an electric ADV or something. It isn’t and instead is more on the lines of a maxi-scooter but a lithe one. We caught up with Guhan RP, the 23-year old co-founder and CEO of Gugu Energy for a quick chat on email. He sent us a few ready answers that he had and then sent us the replies to our questions too.

Before we delve deep into the product itself, let’s take a look at how the company was founded. Guhan had a keen interest in electric vehicles right from the time he was a kid. Apparently, in his second year of engineering, Guhan and his friends watched a Tesla video and were inspired to build an electric car. However, the enthusiasm quickly faded as they realised that building a car had depleted their economic resources. So, the friends were advised to build an electric motorcycle. In 2017, the group received their first round of seed funding from Sundarson Paul for $500,000. Soon after Guhan dropped out of college (lucky chap!) and with co-founder Kannan, set up Gugu Energy. The latter also happened to pump in $2.5 lakh. For the series A-funding, the team is approaching several odd investors. Right now the team consists of 14 people including senior management from different auto OEMs.

Now that the revenue and investments are out of the way, where is all this money going to?

Gugu Energy, at the moment, is concentrating on R&D, pre-production as well as testing components and prototypes. Speaking of which, the entire vehicle has been built in-house at the R&D centre in Coimbatore while the designing has been done at Pune. Gugu also has opened pre-bookings on their website for the R-SUV. The company claims to have received more than 9,000 bookings so far. This is a sizeable number given that the product will be in the market only by 2021. 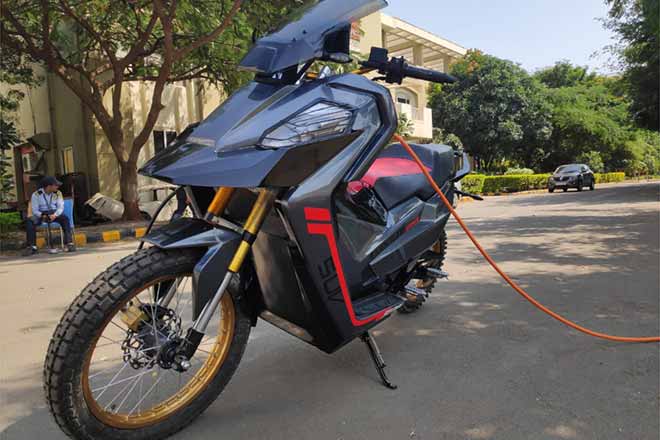 The company plans to open factories in Coimbatore. The initial plan will be to manufacture 25,000 motorcycles each year, with an eye on increasing production thereafter. Unlike Ather, Gugu will charge customers a subscription fee based on the electricity consumed. Speaking of which, Gugu retail stores will fix the charging grids at the customer’s place and also have fast chargers installed in other parts of the state.

Let’s talk about the product in question, the R-SUV

The design has been done in-house and what you see are prototypes. So excuse the seemingly iffy build quality. To put things into perspective, Gugu wanted to move away from the current lead acid battery technology. Though this technology was cheaper in price, it has a low energy density and had low battery life. Gugu wanted to build something from scratch and after four years of study, the team developed a first of its kind semi-solid state battery technology. The semi-solid state battery is a Lithium Nickel unit that can supercharge an electric motorcycle/scooter from 0 – 80 per cent under 30 mins which provides a range of upto 100km. The team integrated a semi solid electrolyte between the cathode and anode which gives 10x high energy density at 260Wh/Kg that can be supercharged within 30 mins from 0-80% of charging time than current lithium battery tech. Gugu claims that the battery life stands at more than 2lakh km. This battery enables the R-SUV to have highest fire safety rating on a battery pack, claims Gugu. Battery swapping tech will not be available on these vehicles. 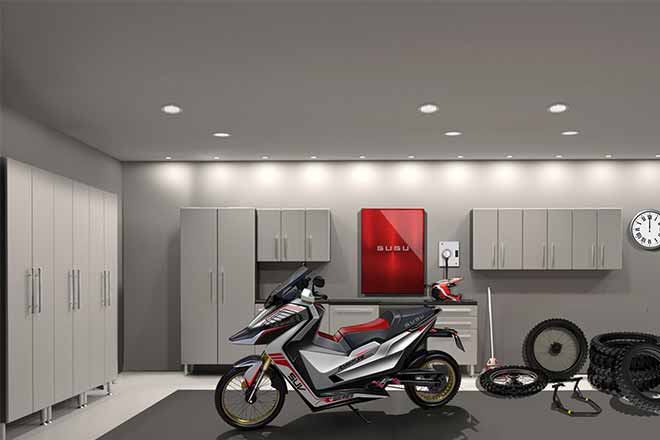 The life of the battery pack will be 80,000km or 1100 charge cycles which is will be more than six years of usage and after 1200 cycles, the battery degradation will be 85 per cent. If the vehicle gives an average of 70km/charge, after 1200 cycles it will give about 55-60 which is 20 per cent less performance. So the battery will be good to last over a vehicle’s run time. But in the near future, Gugu will try to increase cycle life to more than 1500+ charge cycles which can eliminate battery life anxiety when it comes to owning an EV.

The vehicle chassis has been completely built from scratch since the architecture of this motorcycle SUV is non-existent in the market. So, the sub-systems were built from scratch. The vehicle chassis is made of heat treated high carbon steel tubular frame with double cradle frame structure. Even the swing arm is also made from the same material in the interest of keeping the overall costs lower.

Both the bikes will come with USD forks, touchscreen infotainment panel, USB charging for smartphones as well as 28  litres of storage capacity. OTA updates too will be available to the customer free of charge for the lifetime of the vehicle. Moreover, one can use these bikes for both on- and off-road travelling. In terms of servicing, there will be a two year subscription plan for a nominal fee. This includes free charging at Gugu Energy outlets as well as 4G data connectivity and door to door servicing.

As far as while 90 per cent of the things are done in-house, only the battery cells are being sourced from neighbouring countries. This outsourcing too will be eliminated once EV volumes in the country go above a million units/year.

The real deal here is the Gugu is using these bikes as a stepping stone. They plan to launch something more affordable and offer it to the masses. It will most likely be a scooter and could also be the first product to come out from their stables. The R-SUV remains an aspirational product with its specifications, however the real moolah will be raked in by the volumes offering – e-scooter. Moreover, these developments made in the battery field will help Gugu to expand into household appliances as well. Who knows, may be the kid who saw a dream of making an Indian Tesla could eventually achieve it?

If you want to ask what does Gugu mean, then its “family” in Chinese.