An Indian company from Gujarat with experience in green tech has now entered the EV space with their two-wheelers. We take a look at what are the future thoughts of the company.

Odysse Electric Vehicles Pvt. Ltd, is a part of Vora group of companies which has varied line of businesses with primary focus onn automobile-based products along with construction, measuring instruments and home automation. The company says that its background has always been in eco-friendly products, one of their core business being converting petrol vehicles to CNG and LPG. They have a joint venture with the legendary Italian brand Lovato and are their exclusive distributor in India for the last 20 years. Being in the green space for this long, prompted them in 2017 to diversify into the electric vehicle space. E-rickshaws which are very popular in North and East India is something wherein the first step was. Since there were lakhs of e-rickshaws on roads with a price based concept rather than quality based, the Vora group decided to enter the e-rickshaw space and make an effort to convert this unorganised sector into an organized sector/channel.

Thus was born Electreca Vehicles that manufactures e-rickshaw and e-carts for carrying passengers and goods with a brand name Saware. Post this, Nemin Vora, CEO of Odysse Electric Vehicles Pvt Lts, tells us that he wanted to get into something that is more mass accepted. The e-rickshaws were not a popular concept in the South as well as West India. This is where the thought of electric scooters and bikes came to the fore. The two wheeler segment dominates the Indian automobile market in terms of numbers. Nemin says that “The whole process to launch the products in two-wheeler segment took some time to do proper research and analysis and we launched three products in Ahmedabad in March 2020 just before the lockdown (a day prior). However, we resumed operations again in August and started selling in September.” 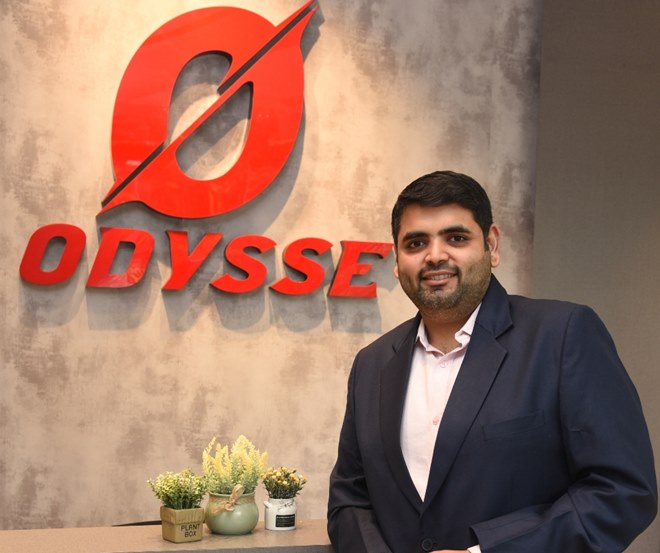 The obvious question these days that people ask him and the dealership is “whether the products are made-in-India or imported from China?” Nemin chuckles on the prospect of answering this with the demeanor of someone having to answer this for the umpteenth time. He says that, “As you are aware complete localisation of EV products is a little difficult in India and there are only a few suppliers here who are ready to invest in manufacturing of EV components. Odysse scooters and bikes are curated to cater to the Indian infrastructure. Various components of electric vehicles are procured from different parts of the world like some from Europe and some of them from China. However, the same are modified/designed to cater to Indian roads. We have selected the suppliers based on their expertise as well as the quality. Thus, it can be said that the components are not entirely Indian but 50 per cent-60 per cent is localised, but the Odysse vehicles are born in India.

Nemin confirms that they are looking to be a 100 per cent local manufacturer by 2022. The imported parts are slowly being replaced by their Indian counterparts. The facility at Ahmedabad is spread across 1.5-2.0 acres. This in turn accords the company a production capacity of 7,500 units per annum. Nemin says that they have plans to expand the facility to accommodate 15,000 units a year. Production can further be expanded if there is a demand.

The demand will obviously be depending on the dealerships, right? Currently, Odysse EV has got six dealerships in all of four cities. Gujarat and Maharashtra are the two states that currently have these EV dealerships. By March 2021, the number will increase to 15 cities and by end of the year, enhance the spread to 10 more.

While the products look quite stylish and futuristic, Nemin confirms, they have been designed through an external agency. The diktat given was to ensure that the products suit all types of riders. All these products, Nemin claims, have gone through stringent durability as well as reliability tests.

Four electric two-wheelers are available from the Odysse stables right now. These are the Hawk, Hawk+, Racer, Evoqis. The latter looks very similar to the popular range of ICE sportsbike available in India right now. All this for an on-road price of just under Rs 1.6 lakh. We will experience the vehicle soon. Keep your eyes peeled on this page.