Exclusive: Kinetic Luna to likely return as an electric moped with 80km range

The Kinetic Luna electric might not only revive the “Chal meri Luna” jingle but also bring the company back into the two-wheeler business after the brief hiatus it had during the BS4 era. Kinetic Green in the meanwhile has paved the way with electric vehicle development in the last few years. 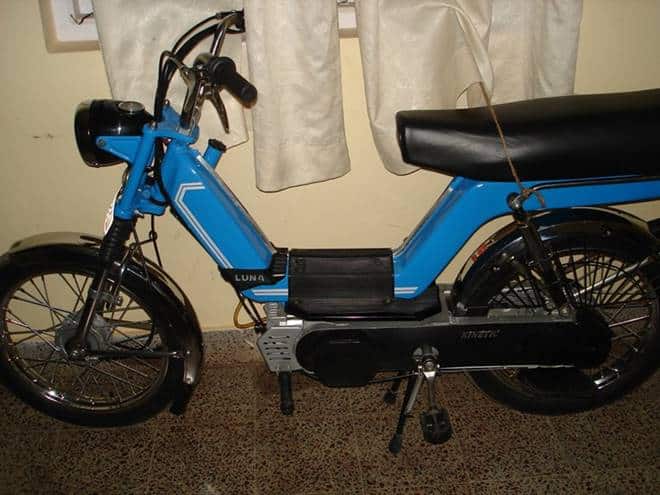 Those born in the 80s and 90s will have many a fleeting memory about the “Chal meri Luna” advertisement. The name Kinetic became famous with this moped. Diminutive but sturdy and ultra-reliable, this gearless, 50cc moped, with pedals to help it move around like a bicycle, should the need arise, was a dream come true for many.  However, given the ever-tightening emission norms, the Luna died a slow death. Kinetic Group also exited the Indian two-wheeler industry thereafter. While all this behind them, the Kinetic Group forayed into electric vehicle technology with a new subsidiary called Kinetic Green. They have built three-wheelers, e-rickshaws, and more. The company claims that they are the leading players as far as electric three-wheelers are concerned. Express Drives recently learned that the Kinetic Group is looking to get back into the electric two-wheeler market. The return will be with the Luna nameplate. The iconic moped will now be available with zero emissions. Yes, an electric Kinetic Luna.

As of now, Kinetic Green is tight-lipped about the entire project. A source close to the project told Express Drives that this new electric moped will likely run a 1kW motor. It will have a Li-ion battery in place considering the shift from lead-acid units currently being practiced by all major EV players. The expected range from the Kinetic Luna electric will be 70-80km while the top speed will be around 25kmph. The latter will ensure that customers don’t have to register the vehicle as it then comes under the slow-speed category. Its price is expected to be less than Rs 50,000 on-road, says the source.  Going with nostalgia, the design is expected to vastly remain the same as well, with a few more modern bits thrown in like a thumb starter, USB charging slot, LED DRL, and the likes. At present, there is only one electric moped and it is the Gemopai Miso. Another one, the Techo Electra Saathi is in the works and should be launched soon. TVS sells the sole ICE moped, the XL100 today.

Express Drives had a chat with Sulajja Firodia Motwani, the CEO and founder of Kinetic Green. We checked with her if this source information is true or not. As is usually the case with most top-honchos, Sulajja said that as of now there are no immediate plans of getting into the electric two-wheeler space. The company is concentrating on building EVs ground-up, in this case, electric rickshaws. The latter as it is getting a good response and Sulajja confirmed that Kinetic Green does its own R&D with respect to making the vehicle safer as well as lightweight. Kinetic Green, in association with Autoline, has also started selling electric cycles recently.

Before signing off, Sulajja told Express Drives that the rest of the shares Kinetic held in Kinetic Motor Cycles Limited have already been sold off. She explained that this means there is no hindrance as to why they cannot launch their own two-wheeler now. To recap, Mahindra and Mahindra had acquired 80 per cent shares of KMCL in 2008. Thereafter Mahindra used Kinetic’s facility and equipment to manufacture its two-wheelers like Mojo, Pantero, Centuro and the scooters. At present, with Mahindra and Mahindra owning the entire stake, the no-competing clause is not applicable anymore.

Kinetic Green has also set up a new plant in Ahmednagar, Maharashtra. It is spread across 100 acres and has 30 sheds. Here, the gearbox assembly, vehicle electrification process, paint and chassis assembly happen. This one exclusively manufactures electric three-wheelers. Further, 30km away, another new plant has been set up. This new plant is spread over 30 acres, has got four sheds spread across 65,000sqft each and has production lines that will cater to electric two-wheelers, three-wheelers as well as the Kinetic Lamborghini Buggy range.

While there has been a denial from the Kinetic Green scion on the launch of the electric Luna, the new plant suggests that it is in the works. What do you think? Let us know.