The bespoke brand’s first electric car will begin to roll out in Q4 2023 and is expected to be priced between the Cullinan and the Phantom. 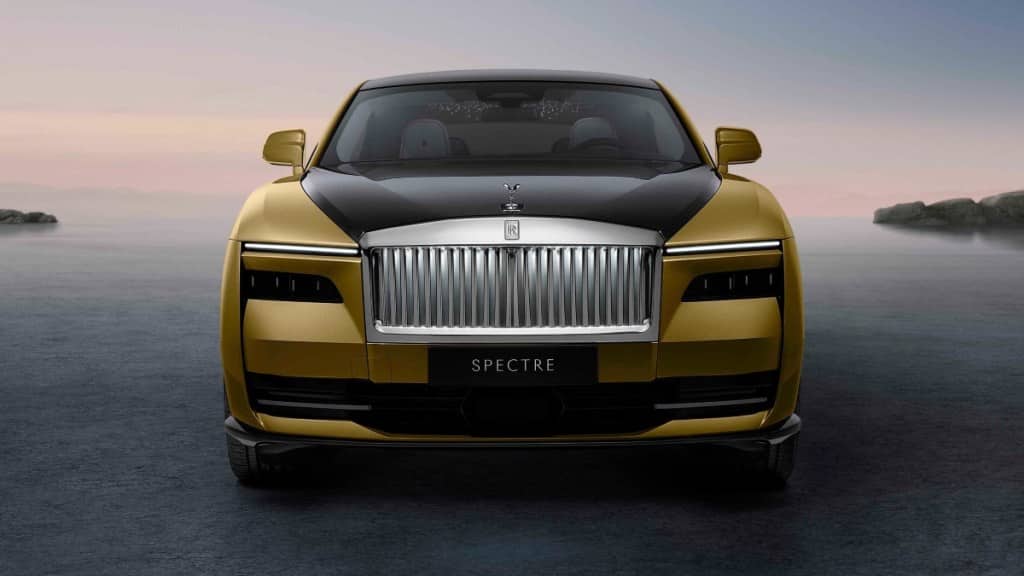 Rolls-Royce has joined the sustainability revolution by unveiling the company’s first-ever all-electric vehicle, the Spectre. Termed the ‘Ultra-Luxury Electric Super Coupé’, this is the marquee company’s first step towards offering an all-electric product line-up by 2030. According to Rolls-Royce, the two-door EV fastback is inspired by the Phantom Coupe and is expected to hit the roads in Q4 2023.

Sure the Spectre is pleasing to the eyes thanks to its swooping silhouette, but here’s a fun fact, with a drag coefficient of 0.25cd, it is the most aerodynamic vehicle from the Rolls-Royce stable. The iconic automobile manufacturer is famous for making a bold statement for its affluent customers and the Spectre is no different as its design elements have been inspired beyond the world of cars to haute couture, modernist sculpture, nautical design, tailoring and contemporary art.

Let’s start with the classical Patheon grille, which is the widest and most imposing ever sported by Rolls-Royce and it is also designed to help improve the Spectre’s aerodynamics. The structure of the grille is inspired by the Pantheon temple in Rome. Coming back to the EV, it sports a split headlamp design with LED daytime running lamps on top and with blacked-out headlamps placed which are crafted like a jewellery box. To up the ante, the Pantheon grille is illuminated, with 22 LEDs lights. The styling of the lower part of the Spectre is called the waft line, which is inspired by yacht design.

The rear lamps, on the other hand, are nestled inside the largest single-body panel ever produced for a Rolls-Royce, which extends from the A-pillar to the boot space. Rolls-Royce has smartly left the vertical tail lamps colourless, giving its customers the option to select the paint scheme that catches their fancy.

According to Rolls-Royce, Spectre is the first production two-door coupe to come with 23-inch wheels in almost one hundred years.

Rolls-Royce is famous for its Starlight Headliner under the roof, but now the Spectre gets the dazzling star-like effect on its door panels as well. This is the first time a Rolls-Royce is equipped with Starlight Doors, which are made up of 4,796 LEDs. The dazzling experience continues as the front passenger’s dashboard section has the Spectre nameplate on it along with a star-studded design made up of a cluster of over 5,500 illuminated LEDs.

According to Rolls-Royce, the Spectre is the company’s most connected car as it is equipped with a digital architecture called Spirit. Apart from managing the fastback’s functions, it offers features like Whispers application, allowing clients to interact with their car remotely, and receive live information curated by the company itself. The Spirit software can also replicate the colour of the dials with the interior of the cabin.

The front seat design has been inspired by British tailoring, with lapel sections while the bespoke stitching, embroidery and intricate piping continue to offer a plethora of options for Spectre customers.

Rolls-Royce hasn’t revealed the final specifications of the Spectre as the tests are in the final phase. Going by the preliminary figures, the Spectre will offer a range of 520 km WLTP and have a power output of around 576bhp and 900Nm of torque. It is expected to go from a standstill to 100 kmph in 4.5 seconds. The bookings for the Spectre are now open globally.