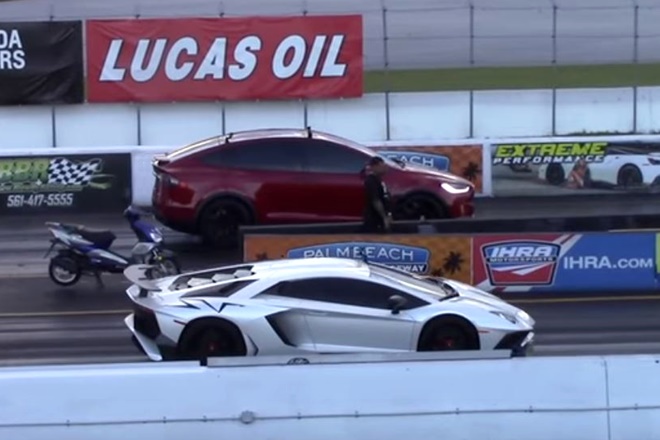 Tesla is on a roll building electric cars that are faster, have greater range and are very friendly to the environment. And now for its latest party trick, a Model S which is an SUV was filmed somewhat trolling the Lamborghini Aventador in a drag race at the Palm Beach International Raceway. The Model X has now set a new world record as the fastest SUV. The video uploaded by DragTimes, a Tesla Model X P100D crossover SUV is seen on the drag strip against a $530,000 Lamborghini Aventador. It is no suspense anymore, but the Model X beat the Aventador no matter how difficult it is to believe.

It isn’t the weight in play here, at 2.5 tonnes the Model X is not a light car whereas the Aventador is a good 500 kg lighter than it. However, the Ludicrous + enabled vehicle beat the Lambo clocking in at 11.418 seconds for a quarter-mile at nearly 189 kph. The Ludicrous enabled Model X sends 1253 Nm of torque and 588 horsepower to all four wheels as compared to the Aventador, that features a 750 horsepower V12 petrol engine driving all four wheels through a seven-speed transmission.

The Model X beat the Lambo by 0.05 seconds. Later in the day, the Tesla established the current world record time for an SUV at 11.418 seconds.

However, the eagle-eyed will see that in the first race, the Lamborghini bogs down at the start and the Model X does not have a full charge. In a competition where results are measured in thousandths of a second, little things like these are the difference between winning and losing.