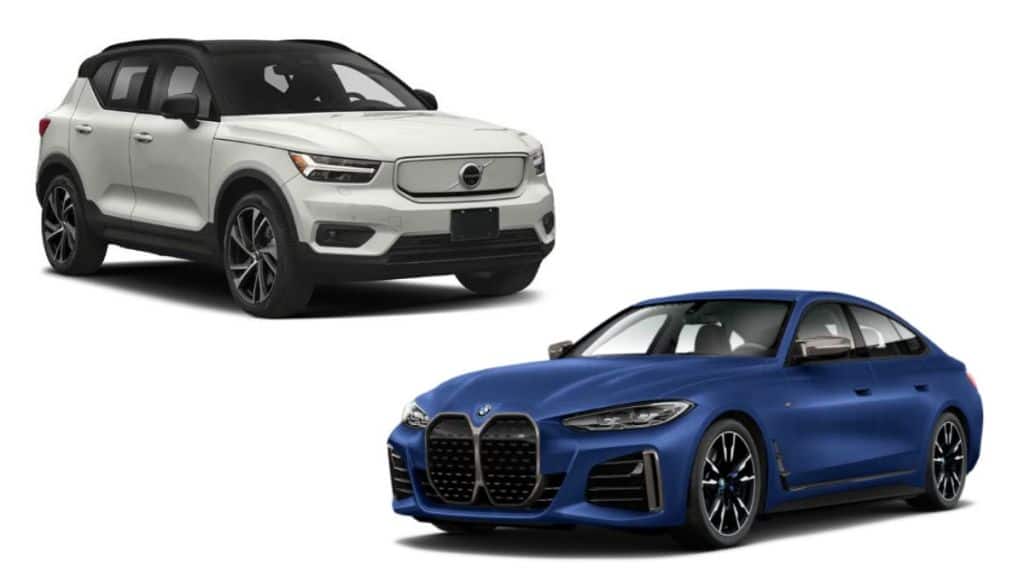 The electric car category has seen numerous launches over the last few months in the Rs 60 to Rs 70 lakh (ex-showroom) price bracket. BMW launched the i4 sedan with a claimed range of over 500 km and Kia followed suit with the launch of the EV6. Following the two launches, Hyundai announced that the Ioniq 5 will soon make its way to India, and Volvo announced the launch of its EV, the XC40 Recharge, for tomorrow.

All the vehicles fall under the above-mentioned price bracket, giving customers the right blend of comfort, range, and most importantly, a clean commute. For those thinking between a sedan or an SUV, the i4 or the XC40 Recharge, we compare the BMW i4 against the Volvo XC40 Recharge in terms of price, styling, battery specifications, range, and more to help you decide.

The Volvo XC40 Recharge is now officially on sale in India, priced at Rs 55.90 lakh ex-showroom. This is the first fully-electric luxury vehicle to be assembled in India and bookings are open at Rs 50,000, while deliveries will begin this October. The BMW i4 electric sedan is on sale for Rs 69.90 lakh ex-showroom.

Volvo XC40 Recharge vs BMW i4 – Design and dimension

Both vehicles sport totally different design languages, the XC40 Recharge is an SUV, while the BMW i4 is a sedan. That said, the XC40 retains most of the design of its ICE sibling, while few changes like the front grille and the 19-inch wheels set it apart from the petrol version.

In terms of dimensions too, the XC40 Recharge has a ground clearance of 170mm while the ICE version stands at 210mm. The boot space is also lower at 419 litres, 41 litres less than its petrol sibling, however, the XC40 Recharge offers an additional 31 litres of space under the bonnet.

The BMW i4 is based on the BMW 4 Series sedan but swaps a number of components to house the battery and its electric drivetrain. The i4 again looks similar to its ICE counterpart, but differences such as the wheels, the closed front grille, and the tweaked bumpers set it apart. The BMW offers a traditional boot but cannot be compared directly in dimensions to the XC40 Recharge owing to different body styles.

Volvo XC40 Recharge vs BMW i4 – Battery, range, and performance

The Volvo XC40 Recharge comes with a 78 kWh battery and twin motors on each axle that makes a combined power output of 402 bhp and 660 Nm of peak torque. This is enough to help the XC40 Recharge accelerate from 0 to 100 kmph in 4.9 seconds, while a fully charged battery is good to take you 418 km (WTLP cycle).

The BMW i4 on the other hand gets an 80.7 kWh battery pack with a single motor that powers the rear axle. This gives the BMW i4 a power output of 335 bhp and 430 Nm of peak torque. This helps the BMW i4 reach 100 kmph from a standstill in 5.7 seconds while giving it a range of 590 km (WTLP cycle).

Between the two, the BMW offers more range, while the Volvo XC40 Recharge is quicker off the line to reach 100 kmph.