Volkswagen India has discontinued the seven-seater Tiguan Allspace in the country. It will be replaced by the five-seater Tiguan Facelift that will be launched in India on December 7, 2021. Volkswagen India showcased three SUVs at the 2020 Auto Expo, namely Taigun, T-Roc, and Tiguan Allspace. The Indian subsidiary of this German carmaker also announced that they will be launching four new SUVs by the end of 2021, the fourth one being the Volkswagen Tiguan Facelift. The facelifted five-seater Tiguan SUV will be launched in India on December 7, 2021. However, ahead of its launch, the company has now discontinued the seven-seater Tiguan Allspace in the country.

The new Volkswagen Tiguan Allspace was launched in India in March 2020 at Rs 33.12 lakh, ex-showroom. It was brought to the Indian shores as a CBU (completely built unit) in very limited numbers. That’s because the companies are now allowed to import up to 2,500 CBU vehicles a year without any homologation process. But, since Skoda, Volkswagen and Audi are a part of the same parent company (Volkswagen Group), they have to share this 2,500-unit allocation among themselves.

Volkswagen Tiguan Allspace was bigger and more spacious than the standard Tiguan. It also had the same powertrain that will be offered with the upcoming five-seater Tiguan SUV. The soon-to-be-launched Volkswagen Tiguan Facelift will be powered by a 2.0-litre TSI turbocharged petrol engine with a direct injection system. This turbo petrol motor will churn out 187 hp of power and 320 Nm of peak torque. The engine will be paired with a 7-speed DSG (Direct Shift Gearbox) and it will get VW’s 4Motion all-wheel-drive system too. 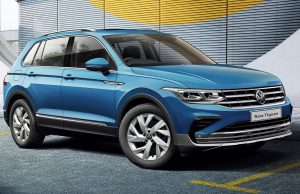 Talking about changes, the new Volkswagen Tiguan Facelift will get a host of cosmetic changes inside and out along with some new features. It will feature new LED Matrix headlamps with DRLs, revamped bumpers, a massive panoramic sunroof, three-zone climate control, etc. It is scheduled to be launched in India on December 7, 2021, and is expected to be priced under Rs 30 lakh, Ex-showroom. Once launched, the Volkswagen Tiguan Facelift will directly rival the likes of the Hyundai Tucson and the Jeep Compass.