Volkswagen has recently launched the all-new Volkswagen Taigun mid-size SUV in the Indian market. The Taigun is a very important product for this German car manufacturer in India. It is also the first car from Volkswagen to come under the VW Group’s new India 2.0 project. The prices of the new Volkswagen Taigun start at Rs 10.49 lakh, Ex-showroom Delhi. The company has also launched Extended Warranty and Service Value Packages for the Volkswagen Taigun.

At the launch event of the new Volkswagen Taigun SUV, the company even launched the Taigun Loyalty products, which include the Extended Warranty and Service Value Packages. But, before we mention the price and details about these service packages, let us tell you that the new Volkswagen Taigun, just like all other VW cars sold in India, comes with the company’s 4EVER Care package. As a part of this package, the Taigun gets a standard 4 year/1,00,000 km warranty. 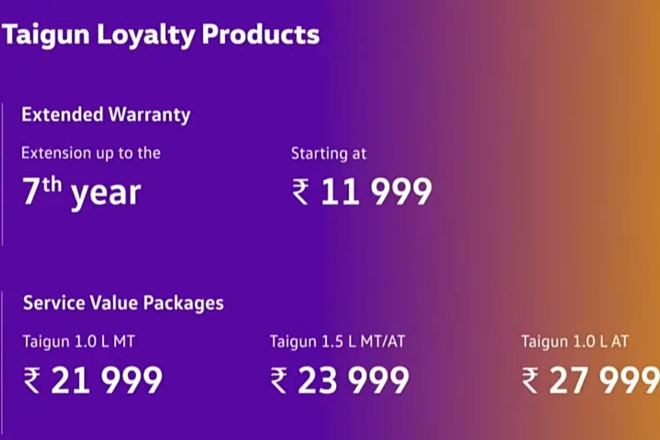 The warranty can be further extended up to 7 years and 1,50,000 km and the price of this Extended Warranty package starts at Rs 11,999. Moreover, the company is offering 4 years roadside assistance which is extendable up to 10 years along with three free services. The Taigun is offered with two turbo petrol engine options in India – a 1.0-litre TSI and a 1.5-litre TSI. Both the engines come mated to a 6-speed manual gearbox. The 1.0-litre TSI version is also offered with a 6-speed torque-converter AT while the 1.5-litre TSI motor gets a 7-speed DSG.

Now, for the Taigun’s 1.0-litre TSI manual version, the service package is priced at Rs 21,999 for four years while for the 1.0-litre TSI AT version, it has been priced at Rs 27,999. The service package for the 1.5-litre TSI manual as well as the DSG version has been priced at Rs 23,999. While announcing the Service Value Packages for the Taigun at the launch event, Ashish Gupta, Brand Director, Volkswagen Passenger Cars India said, “A Volkswagen only needs a service once a year or 15,000 km. This means that you can now maintain your Taigun at a little over 5000 rupees a year.” The company also claims that the cost of ownership of the new Volkswagen Taigun starts at only 37 paise/km for the 1.0-litre TSI variants and 40 paise/km for the 1.5-litre TSI variants.