We’ll never know what goes into the mind of a vandal. What urges him/her to indulge in such unintelligible feats. 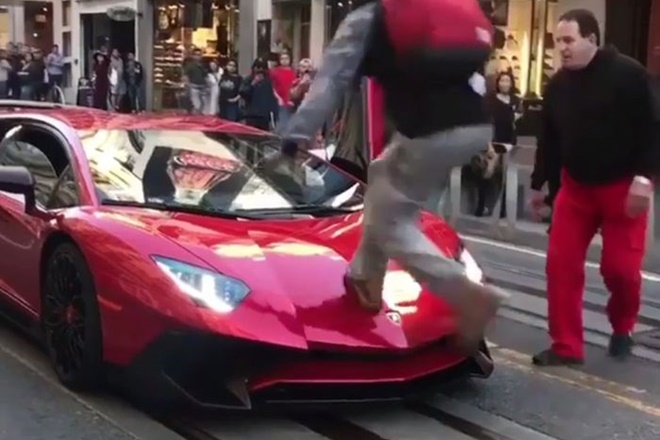 What fuels the will to mess with other people’s property in some people? Well, this guy decided to stomp all over the roof of a parked Lamborghini Aventador SV in downtown San Francisco. And what the owner did in response to this outrageous feat, is somehow like watching one of those ‘satisfying videos’. There have been instances where such videos have come out to be staged, but the surprise on the onlookers’ faces and the enraged reaction of the owner and the fact that the two different angles in the video come from two separate Instagram accounts, may point to its authenticity. It started with a man with a red backpack leaping onto the Aventador’s bonnet, stepping on the windshield and running across its entire length, before sprinting away on the street. Sure, he got chased by the owner, an older gentleman, but the goon did not stop there.

The owner stopped chasing him and turned around to get to his car. The vandal, however, returned to have another go at running over a Lamborghini. But by this time, the owner’s reflexes had been sharpened post a heart-breaking sight of someone stomping on his car.

Before the man could climb the car again, the owner turned around and yanked him away from the car, pushing him on the ground, while he screamed, “you’re lucky I don’t f***ing kill you right now!” After the kid makes some unintelligible excuses and an argument later, the matter slowly settles down.

We’ll never know what goes into the mind of a vandal. What urges him/her to indulge in such unintelligible feats. But the owner’s reaction is perhaps the classic response anyone will have watching their car being used as a tap dance floor. The 740-horsepower, V-12 Lamborghini Aventador SV costs about Rs 8 crore.