Here’s a compilation of the most anticipated car launches in the next few months within a price bracket of under Rs 10 lakh. 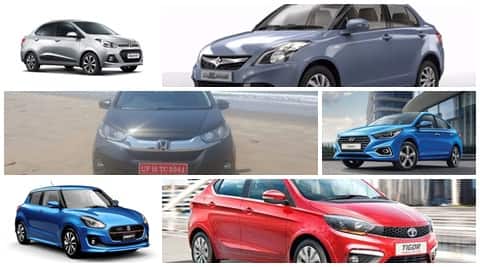 The year 2017 kicked-off with some major launches such as the Maruti Suzuki Ignis and Tata Hexa in the country. The action doesn’t end here as there are some more major launches lined up for the rest of the year. Some of these cars will play a critical role in defining the company’s future roadmap in the country. Some of these vehicles will come with segment-first features, styling and engine options as per the growing demands in the Indian car market. Here’s a compilation of the most anticipated car launches in the next few months within a price bracket of under Rs 10 lakh.

Honda Cars India will launch the highly anticipated WR-V compact SUV in India on 16th March, 2017 and the company has already started accepting bookings for the car at a token amount of Rs 21,000. The Honda WR-V will be based on the Jazz and will share few elements with the hatchback both at the exterior and interior. It will measure 3,999 mm in length, 1,734 mm width, 1,601 mm in height and 2,555 mm in wheelbase.

Expected equipment list will include a new front fascia that will feature headlamps with daytime running lamps, a revised tail lamps and silver skid plates on the front and rear bumper. The compact SUV will also have side body cladding and roof rails to accentuate its SUV character. The interior will receive an all-black theme with silver accents on the AC vents, dashboard and steering wheel. The company will offer the SUV with multifunction steering wheel, a touchscreen infotainment system with Mirrorlink smartphone connectivity, voice recognition and a reverse parking camera. The standard safety features will consist of dual front airbags and ABS (Anti-lock Braking System) with EBD (Electronic Brakeforce Distribution), while to top version will get a touch panel automatic climate control, push-button start/stop and rear wiper with defogger.

Tata Motors’ latest offering in the Indian car market will be the new Tigor, which was earlier speculated to be called Kite 5. The Tata Tigor is said to be replacing the ageing Tata Indigo eCS in the country and will be equipped with new engine options along with a new design and a host of equipment.

Powering the new Tigor will be a 1.2 litre petrol engine, which will produce around 83 hp of power and 110 Nm of torque. The diesel versions will get a 1.0 litre turbocharged unit that is expected to generate about 88 hp and 140 Nm of torque. We expect the new diesel engine to deliver a fuel efficiency of around 25 kmpl. Both the engines are likely to be mated to a 5-speed manual transmission.

In terms of design, the Tata Tigor will be different from the Kite 5 that was showcased at the 2016 Auto Expo. The Tigor will be based on the company’s Impact design language and will also share its underpinnings with the Tiago.
Inside the cabin, the new Tigor will be equipped with features such as dual tone upholstery and ConnectNext infotainment system by Harman with eight-speaker and GPS navigation. The car manufacturer will also offer cooled glovebox, different drive modes, namely; Eco and City as well as dual front airbags, ABS (Anti-lock braking System) with EBD (Electronic Stability Control) and corner stability control.

Hyundai has already unveiled the 2017 Verna in Russia which is christened as Solaris in the country, however, the car will be launched in India as the updated Verna. In India, the Verna facelift will get minor tweaks at the exterior and interior, but will get the same engine options as on the current model.

The Hyundai Verna facelift is expected to be based on Hyundai’s Fluidic Sculpture 2.0 philosophy and will use high-strength steel for safety and improved stability. It will be longer and wider than the current model by 5 mm in length and wider by 28 mm, while the wheelbase has been extended by 30 mm.

Hyundai has upgraded the exterior of the new sedan whose design will resemble the Elantra. It will also get minor cosmetic enhancement like a new front and rear bumper, revised front grille with chrome slats and front fog lamp with chrome embellishments. The automaker has also enhanced the tailgate which will now feature new design along with slim LED turn signals. A dual-tone interior featuring multi-info digital instrument console, touchscreen infotainment system with navigation, Bluetooth, Android Auto and Apple CarPlay will be a part of the cosmetic changes inside the cabin.The higher variants are expected to be equipped with dual front and side airbags, ESP (Electronic Stability Program), automatic climate control system and reverse parking sensors with rear view camera.

The new 2017 Hyundai Verna will get similar engine options, a 1.4 litre and 1.6 litre petrol and diesel engine, which also powers the current Hyundai Verna. The 1.4 litre petrol engine develops 100 hp of power and a 1.6 petrol engine produces 123 hp. However, the company could tune the engines to offer more power and fuel-efficiency. The engines will be mated to a 5-speed manual, 6-speed manual and 5-speed automatic transmission. There is also a possibility of a mild-hybrid system to compete with the only sedan with this technology, the Maruti Suzuki Ciaz SHVS (Smart Hybrid Vehicle by Suzuki).

Recently, Tata Motors showcased the Tata Nexon at the 2017 Geneva Motor Show, which is expected to be launched in India around the festive season in October-November, 2017. When launched in India, the Nexon will compete with the likes of the Maruti Suzuki Vitara Brezza, Ford EcoSport and Mahindra TUV 300.

The upcoming Nexon will be based on Tata Motors’ IMPACT design philosophy and is expected to be powered by a 1.5 litre Revotorq turbocharged four-cylinder diesel unit and will be paired to a 6-speed manual transmission. The petrol variants are expected to be powered by a 1.2 litre Revotron three-cylinder engine, paired to a 5-speed manual gearbox. The carmaker might also launch the car with an AMT (Automated Manual Transmission) unit as well as three driving modes. Besides this, the compact SUV will also be equipped with a dual path suspension that offers improved NVH (Noise, Vibration & Harshness) level.

The exterior features of the Nexon will include new projector headlamps with daytime running lamps, U-shaped LED tail lamps and LED lamps for the registration plate. The compact SUV will also get contrast roof and ceramic side finisher along with SUV-like features such as roof rails, rear wiper and roof mounted spoiler with brake light. Tata will equip the higher trims with body coloured door handles, reverse parking sensors and 16-inch alloy wheels, while the interior will get steering mounted controls, automatic climate control and keyless entry. The lower versions will be offered with black body cladding and black coloured door handles.

The interior of the top versions is also likely to receive a touchscreen infotainment system, similar to the one equipped on the Tata Hexa, that features a Harman display with Map MyIndia navigation, Bluetooth connectivity and 8-speakers.

The Hyundai Xcent facelift has been spied testing several times on Indian roads, which suggest that the car will launch soon in the country this year. The 2017 Hyundai Xcent will get cosmetic upgrades and a new diesel engine, similar to the recently launched Hyundai Grand i10.

The new Xcent will share the design and features with the new Grand i10 such as a redesigned bumper, cascading front grille design, new fog lamps and LED DRLs (Daytime Running Lamps). Apart from this, the overall styling will remain unchanged.

Maruti Suzuki has officially unveiled the new Swift at the Geneva Motor Show, which is expected to hit the Indian shores by July-August, 2017. The anticipated new Maruti Suzuki Swift will receive fresh interior and exterior and is also likely to get a Boosterjet engine, similar to the recently launched Maruti Suzuki Baleno RS.

Based on the Baleno’s platform, the 2017 Swift will shed some weight by around 120 kg, making it to 840 kg of kerb weight, which is lighter than the ongoing model at 965 kg (depending on the variant). The car manufacturer has also redesigned the car which will now get sharp creases on the bonnet and sides. The new Swift will also receive blackened out hexagonal grille with chrome surrounds, LED DRLs (Daytime Running Lamps) with projector headlamps and LED tail lamps.

The interior changes will include a sporty flat-bottomed steering wheel with audio, phone and cruise controls, a multi-information 4.2-inch screen as well as a 7-inch touchscreen infotainment system with Apple CarPlay and Android Auto. The 2017 Maruti Suzuki Swift will be available with safety features like ABS (Anti-lock Braking System) with EBD (Electronic Brakeforce Distribution) and dual-front airbags as standard. The company might also offer the RS version as that of the Baleno RS, but at a later stage. The Swift RS will be based on the standard Swift and will get sporty features inside out. The engine options will remain unchanged and will be powered by the 1.2 litre K-Series petrol motor and 1.3 litre DDiS motor mated to a 5-speed manual and a CVT transmission.

The new Maruti Suzuki Swift DZire, on the other hand, is expected to be launched before the Swift hatchback by April, 2017 and is expected to get a 1.2 litre K series petrol engine and 1.3 L DDiS engine. The major changes that will be made to the 2017 Swift DZire will include projector headlamps, new front grille and LED tail lamps. Inside the cabin, the car features a new touchscreen infotainment system compatible with Apple CarPlay and Android Auto, similar to the upcoming Swift. It is expected that the Swift DZire might also get the SHVS ( Smart Hybrid Vehicle by Suzuki) technology, however, the company has not confirmed the variant yet.