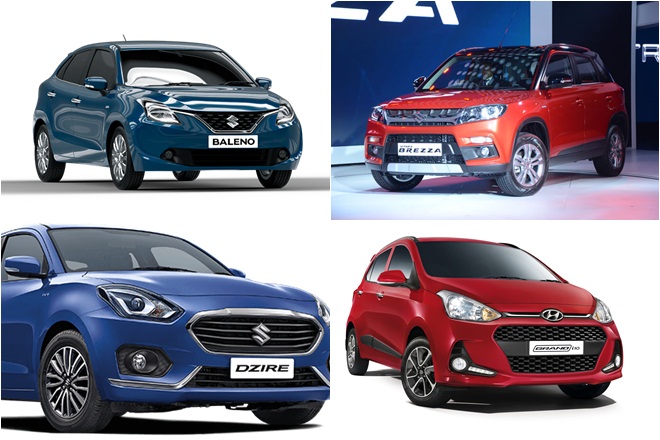 Maruti Suzuki’s dominance seems to be getting better with every passing month this financial year as the company’s vehicles took seven of top ten spots in the overall passenger car segment sold in the in July 2017 in the domestic market. July saw total sales of over 2.98 lakh units in the passenger vehicle segment that has registered a growth of 15.12% over last financial year. GST benefits and discounts resulted in the double-digit positive growth. Over 50% of the cars sold in July 2017 was by Maruti Suzuki, the market leader sold over 1.53 lakh cars in the domestic market, Maruti Suzuki managed to sell almost 4,945 units every day last month. Five of Maruti Suzuki’s hatchbacks, one sedan and one SUV featured in the top ten list, Hyundai Motor India had three of its flagship models as well. Maruti Suzuki Alto continues to be India’s top-selling car as the company sold a total of 26,009 units last month as compared to 19,844 units. This includes both the variants – Alto 800 and Alto K10. The demand for the entry level car seems to have increased due to GST benefits as the Alto gained highest ever monthly sales after ten months. Maruti Suzuki Baleno hatchback which is being sold through company’s NEXA channel took the second spot stealing it from Maruti Suzuki Dzire.

The company sold a total of 19,153 units of its Maruti Suzuki Baleno making it the best month for the car in terms of wholesales. The car is sold in with both petrol and diesel engine options and is offered in 11-variants. Maruti Suzuki Wagon R dominated the third spot as car’s sales grew by 7.19%. Maruti Suzuki sold a total of 16,301 units in July 2017 as against 15,207 units in July 2016. Maruti Suzuki’s SUV Vitara Brezza sold over 15,200 units in the domestic market last month. The car overtook the sales of the popular Swift hatchback that took the fifth spot by selling 13,738 units. The new generation Maruti Suzuki Swift is all set to debut at the 2018 auto expo and is expected to bring Swift in the top three selling cars in the Indian market once launched.

Hyundai Grand i10 and Hyundai Elite i20 took the sixth and seventh spot respectively. The Indian arm of the Korean car maker sold a total of 12,002 units of its Grand i10 and 11,390 units of its Elite i20. Both very popular and have been a run away success model for the company in India. The next gen Hyundai Verna will soon be introduced in the market which would help the company to gain some market share in the domestic market.

Newly launched Maruti Suzuki Dzire has dropped in ranking but that might have to do with deliveries, the car still has a waiting period of about 20-75 days as confirmed by dealers. However, Maruti Suzuki sold a total of 11,187 units in the domestic market. Maruti Suzuki Celerio just managed to sell a few units more than Hyundai Creta. Celerio saw total domestic sales of 11,087 units whereas Hyundai sold 10,556 units of Creta SUV.