Top-10 carmakers in India and their market share: Maruti Suzuki owns half of the Indian market 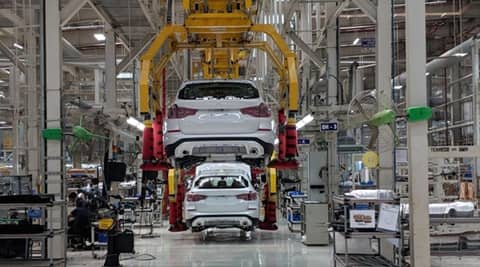 The financial year 2017-18 has seen car sales in India crossing 3.28 million units for the first time in India and very soon is set to overtake Germany to become the third largest car market globally. Overall 3,287,965 units were sold in India in the domestic market last financial year at a growth rate of 7.89 percent. While many expected the passenger vehicle sales in India (Cars, SUVs, Vans) to report a double-digit growth, frequent changes to the tax structure post-GST and addition of cess of SUVs and premium cars did have an adverse effect that resulted in slowing down the pace. Sales of premium automakers like BMW India, Audi India, Mercedes-Benz India and Jaguar Land Rover are not included in this list.

All car makers combined saw a total production of cars crossing the 4 million manufacturing milestone and Utility vehicle (UV) dominated by SUVs production crossing 1 million. These are also the highest ever sales and production numbers ever registered in India. There are about 16 major mass-market car manufacturers in India (excluding premium carmakers) out of which 15 sell cars in India.

India’s largest automaker Maruti Suzuki continues its strong domination on the Indian car market and sold a total of over 1.64 million vehicles in the domestic market bringing its market share very close to 50 percent. The company has not only managed to sustain its huge sales but have also increased its market share in both urban and rural buyers. New car launches like Maruti Suzuki Dzire, all-new Swift along with the constant demand of Maruti Suzuki Baleno and Vitara Brezza helped the company to achieve this huge growth. Maruti Suzuki Alto continues to remain the most sold car in India. The company also exported about 1.23 lakh units to its export markets.

Indian-arm of the Korean carmaker, Hyundai Motor India has also grown by over 5 percent in India and overall managed to sell over 5.36 lakh cars and grabbing a market share of 16.30 percent in India. The launch of facelifts of Hyundai Grand i10 and Hyundai i20 along with all-new Verna backed by strong sales of Hyundai Creta has seen its manufacturing units in Chennai running full houses to cope up with the increasing demand. The company also exported over 1.53 lakh cars to various countries especially middle-east.

Indian automakers, Mahindra & Mahindra and Tata Motors too have increased its market share in India. While for Mahindra it was a year of consolidation and despite no all-new launches by the company, it secured the number 3 spot in the Indian market by selling over 2.48 lakh cars and a market share of over 7.56 percent. Mahindra will launch a range of new vehicles this year which will further see more sales in India. Tata Motors’ aggression and launching new products like Tigor and Neon has proved to be extremely successful with Tata Tiago sales reaching all-time high, Tata overtook Honda Cars India to become the fourth largest automaker in India. The company has sold 210,200 cars in the recently concluding fiscal.

Other Japanese automakers including Honda Cars India and Toyota Kirloskar has seen some decline in its sales over last few months. However, Honda Cars India finished the year at industry growth rate and sold 170,026 units and the launch of its Honda WR-V SUV played a crucial role for the company to sustain sales. The company will launch its new Honda Amaze in May 2018 and will be followed by the return of Honda Civic and Honda CR-V SUV.

Toyota in India sold about 1,40,645 units last year and expect it to gain market share by launching the new Toyota Yaris that will take on the likes of Maruti Suzuki Ciaz, Honda City and Hyundai Verna. Toyota owns about 4.27 percent market share in India.

Renault’s sales in India has dropped by a massive 25 percent but still recorded a sales of over a lakh cars which is more than what Nissan and Volkswagen sold in India. Renault’s market share stands at 3.10 percent.

Ford India’s sales are reported at 90,061 units declining marginally by about 1.4 percent. However, Ford’s exports have gone up by 15 percent and the company exported over 1.81 lakh cars out of India overtaking Hyundai to become the number 1 exporter in the financial year 2017-18.

Over 7 carmakers in India including the likes of Fiat Chrysler India, Nissan India, Volkswagen India, Skoda Auto India, General Motors (sales before stopping domestic operations) Force Motors and Isuzu combined together have a market share of 4.41 percent. Strong sales of Jeep Compass SUV helped FCA India to sell over 19,358 units. With no new products, Nissan-Datsun and Volkswagen sales in India continue to decline and stood at 52,796 units and 45,329 units respectively. Skoda Auto’s sales in India has gone up by over 21 percent at 17,387 units.

The outlook for FY2019 is not all good for the auto industry. As per RBI survey, consumer confidence in top cities has seen a decline, 20-top cities that contribute to about 50% of the sales have shown slow growth in the last 3-4 years; however, the rural growth story will continue to support the industry in FY19. Price of all main commodity used in vehicle manufacturing has increased sharply in last one year.

While most of the automakers have announced price hikes, expect the prices of the cars/SUVs to further rise in coming months. Vehicles finance rates are still high and as India and automakers get ready to face the BS-VI transition in 2020 will see many postponing buying of new vehicles. SIAM expects growth would also be mildly supported by public spending in rural regions.