The Season 4 of the Tata T1 Prima truck racing saw new Indian and international truck drivers battling with each other on the race track on their Tata Prima race trucks. 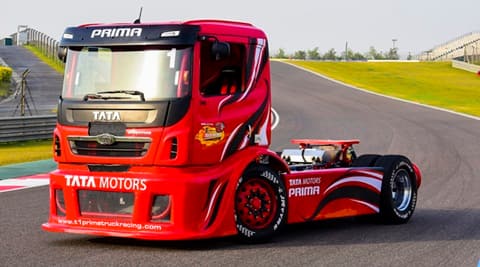 Tata Motors concluded the Season 4 of T1 Prima Truck Racing (T1 Racer Program) Championship at the Buddh International Circuit (BIC) in Greater Noida on 19th March. The Season 4 was conducted under the support of FIA & FMSCI and was organised by the Madras Motor Sports Club (MMSC). The event followed safety and performance standards as per the guidelines of the British Truck Racing Association (BTRA).

At present, the truck drivers in India are ageing and there are few young drivers who take up this profession. One of the reasons behind doing this event is to make the truck driving profession inspirational and encourage younger drivers to take up the profession. This season saw new Indian and international truck drivers battling with each other on the race track on their Tata Prima race trucks.

The T1 Racer Program is one of the country’s most comprehensive motorsports driver training and selection programs conceptualised and conducted by Tata Motors. All the participants have to undergo an evaluation and selection process over a period of 2 months before taking part in the race .

After exciting rounds of on-track action the day witnessed winners among some disappointed drivers who failed to finish the race due to various racing incidents. Czech Republic racer, David Vrsecky stood the first position at the fourth edition of the T1 PRIMA Truck Racing Championship. David competed with international drivers from FIA’s European Truck Racing Championship. Nobert Kiss of Hungary from the Team Tata Technologies Motorsport, was the first runner-up, while Gerhard Korber from Germany of Dearer Warriors secured the second position.

Besides this, the Season 4 also saw some of the country’s most prominent music and entertainment fraternity. Bollywood superstar and the brand ambassador Akshay Kumar was also present to witness the fun filled truck race. Garima Yajnik also joined with her foot-tapping Indo-western numbers along with Siddharth Mahadevan and KK.