After having released the Gold Edition of Tata Safari a few months ago, the company has now launched the Dark Edition too. The SUV gets all-black exterior, interior and a few equipment upgrades. 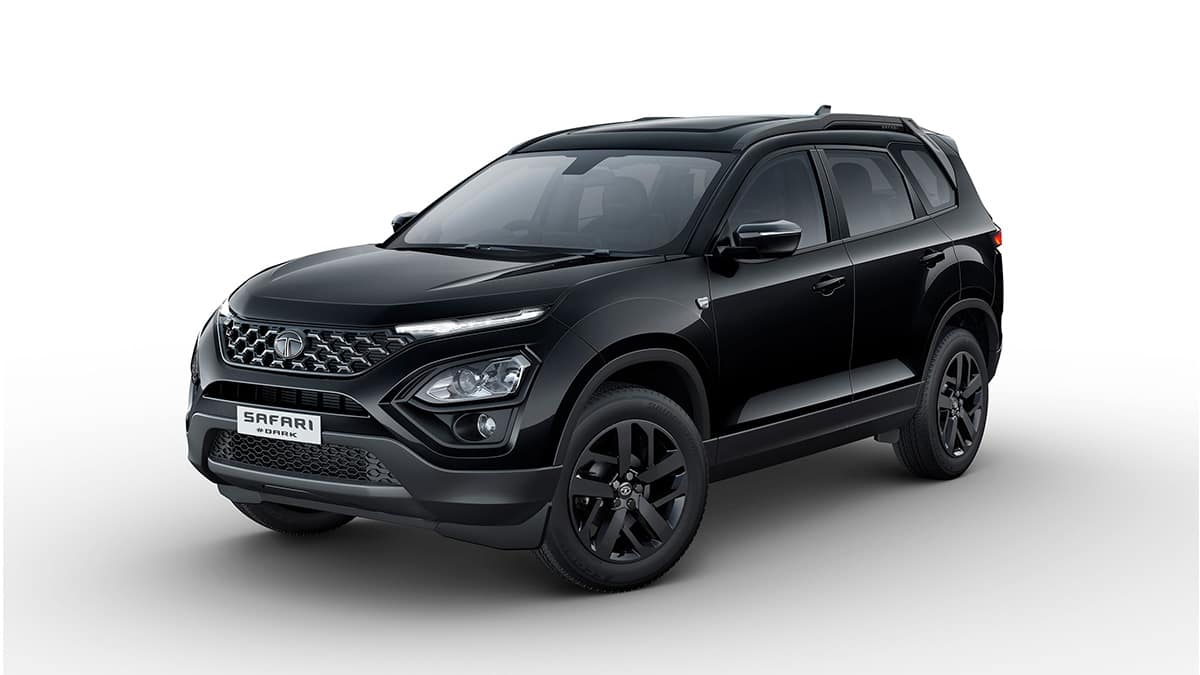 Tata Motors have launched the Dark Edition of their flagship SUV, Safari. The vehicle is the latest to join a lineup of Dark Edtion vehicles that consists of models like the Nexon, Altroz and Harrier. With the Dark Edition, the Safari is now being offered in three different versions – Adventure, Gold and Dark. The vehicle has a starting price of Rs 19.05 lakh (ex-showroom).

At launch, the Tata Safari was already available in the Adventure Edition and back in September 2021, the company also launched the Gold Edition. The Dark Edition scheme is available to customers opting for the XT+/XTA+ and XZ+/XZA+ trims. The XT+ Dark trim costs Rs 19.05 lakh (ex-showroom), making it the most affordable among the three editions.

Just like the other Tata vehicles in the Dark lineup, the Safari also gets Oberon Black colour scheme. The exterior of the SUV is black all around, including the 18-inch Blackstone alloy wheels. There is Dark badging on the fenders and the tail section of the vehicle.

While the regular Safari comes with a beige and black interior, the Dark Edition gets an all-black interior. The Dark upholstery consists of Nappa Granite Black colour scheme with Blue Tri Arrow Perforations and Blue Stitching and Blackstone Matrix dashboard. Apart from this, the SUV also gets other exclusive features such as Ventilated Seats on both 1st and 2nd row, Air purifier and Android Auto & Apple Car Play over Wi-Fi.

Commenting on the launch, Rajan Amba, Vice President, Sales, Marketing and Customer Service,  Passenger Vehicles, Tata Motors, said, “Launched in July last year, with a power-packed line-up featuring India’s safest premium hatchback – the Altroz, India’s first GNCAP 5star rated car – the Nexon, Tata Motors’ premium midsize SUV with the Land Rover DNA – the Harrier and India’s highest selling passenger electric car – the Nexon EV, the #DARK range has, in a very short span of time, become a mainstay of our New Forever range of passenger vehicles. This will be even truer now with the addition of Safari #DARK to the line-up, with the exciting & unique proposition that it has to offer to the customers.

Since this is just a cosmetic upgrade, the mechanical specifications of the Safari still remain the same. This three-row SUV is built on the OMEGARC architecture and is available in both 6 and 7-seater variants. It comes with a 2.0-litre diesel engine that puts out 167.6hp and 350Nm of torque. The Safari can be had with either a 6-speed manual or an automatic transmission. It gets safety features such as disc brakes on all wheels, ABS, EBD, TPMS, ESP, 6 airbags and more.