The Tata Nexon will be based on the company’s IMPACT design language and will be positioned in the compact crossover segment. 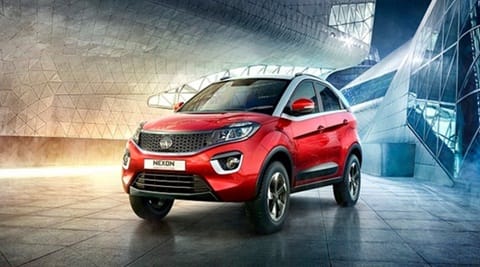 Tata Nexon has been doing rounds on Indian roads for quite some time and now the upcoming car has been spied once again. The recently spied images by Motoroids.com is the base version, which reveals the car’s interiors and exterior design. As per the report, some units of the test mule have already been sent to the Vehicle Research and Development Establishment (VRDE) for approval.

The images suggest that the base version of the upcoming Tata Nexon is expected to feature steel wheels and a roof mounted shark-fin antenna. The cabin is likely to receive dual tone interiors, three drive modes, namely; City, Eco and Sport. These driving modes can be operated with a rotary knob located near the handbrake.

We expect the car manufacturer to offer the Nexon with projector headlamps with DRLs (Daytime Running Lamps), U-shaped tail lamps and chrome finished ‘Humanity line’ front grille on the higher versions. The interior of top variants will receive dashboard-mounted touch screen infotainment system supplied by Harman and will feature Map MyIndia navigation, Bluetooth, USB and Aux-in connectivity. The dashboard of the car is likely to get a piano black finish, wedge-shaped air-conditioning vents and multi-info display.

The Tata Nexon is based on Tata’s ‘IMPACT’ design language and is likely to be powered by a 1.2 litre Revtron three-cylinder petrol and a new 1.5 litre common rail turbocharged diesel engine. The same engines also power the Tiago. The engines will be paired to a 5-speed manual, while some petrol variants are expected to get an AMT (Automated Manual Transmission) gearbox.

The Tata Nexon will have 3,995 mm of length, 1,811 mm of width, 1,607 mm of height and of 2,498 mm of wheelbase. Expected to be launched in India by the end of this year, the Nexon is likely to carry a price tag between Rs 6.5 lakh and Rs 8.5 lakh, ex-showroom, Delhi. It will compete with the likes of the Ford EcoSport, Honda WR-V, Mahindra TUV300 and the Maruti Suzuki Vitara Brezza.