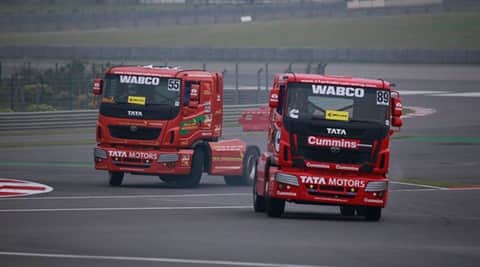 Tata Motors will organise the Season 4 of T1 Prima Truck Racing (T1 Racer Program) Championship on 19th March, 2017 at the Buddh International Circuit (BIC) in Greater Noida. The Season 4 will be conducted under the support of FIA & FMSCI and will be organised by the Madras Motor Sports Club (MMSC). The event will have all the safety and performance standards as per the guidelines of the British Truck Racing Association (BTRA).

The Season 4’s main attraction will be the Indian truck drivers on their Tata Prima race trucks battling with each other on the race track. Like every season, this time too, Tata Motors will introduce new truck drivers and will make the profession of truck driving aspirational and thereby making the profession attractive for younger drivers, which would address the old-age problem of drivers the sector is grappling with.

Ravi Pisharody, Executive Director, Commercial Vehicles, Tata Motors Ltd. said, “With the T1 PRIMA TRUCK RACING CHAMPIONSHIP we are ahead of contemporary, we are FUTURE READY and through this property, we’ve proved time and again to showcase a distinctive partnership between sporting and technological excellence for the Tata Motors brand. Season 4, will further enable us to showcase our passion, commitment and leadership, in the Indian commercial vehicle space, as we prepare to demonstrate and introduce new innovations and new heroes on the Indian trucking and motorsports scene. As we gear up to showcase our preparedness for the future in Season 4, I look forward to another exciting and power packed race in 2017.”

The Season 4 of the T1 Prima Truck Racing Championship will have three categories, namely, Super Class where top 10 drivers will be from TRP 2.0 (Season 2). The second category will be the Champion Class comprising of the top 10 finalists from the TRP 1.0 ( Season 1) and Pro Class where the company will choose 12 international racers in six teams.

Vicky Chandhok, Mentor, T1 PRIMA TRUCK RACING CHAMPIONSHIP, said, “Truck racing is a fun sport that many did not realise could actually be done, but Tata Motors made it happen and today the T1 PRIMA Truck Racing Championship is one of the most awaited events on the Indian motorsports calendar. What makes the T1 PRIMA championship all the more fulfilling is the sense of purpose it brings, not only to the motorsports scene, but how it ties into the Indian commercial vehicles industry and more importantly to the profession of truck driving. Season 4 promises to be even more exciting.”

Tata Motors will conduct the Season 4 of the T1 Prima Truck Racing Championship after seeing an overwhelming response of the last three truck racing championships in the country. The TRP 2.0 was held in 2016 and received registrations from 1,000 participants across the country. Besides this, the drivers will also be given formal training before the race and feedback sessions after the event to express their thoughts, aspirations and expectations.