The new alternate fuel bus for commercial use was flagged off by Dharmendra Pradhan, Minister of MoPNG and Piyush Goyal, Minister of State with Independent Charge for Power, Coal, New and Renewable Energy and Mines 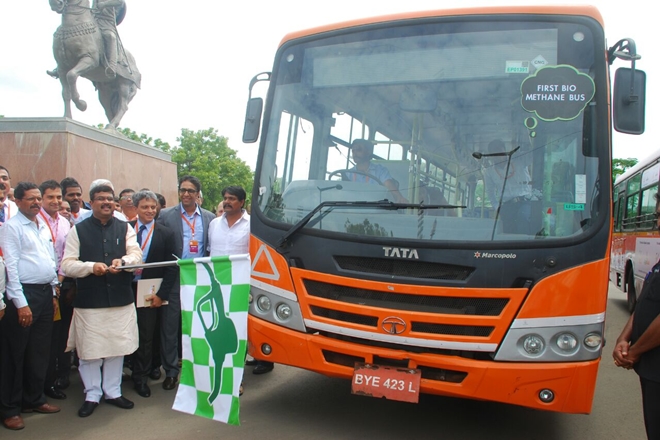 Commercial vehicles wing of Tata Motors showcased the first Bio-CNG or bio-methane bus at Urja Utsav in Pune, Maharashtra. Along with the new alternative fuel bus, Tata Motors also showcased three engines compatible with bio-methane fuel for Light Commercial Vehicles, Intermediate Commercial Vehicles as well as Medium Commercial Vehicles codenamed as 5.7 SGI and 3.8 SGI. The bus that was showcased, Tata LPO 1613 with 5.7 SGI NA BS-IV IOBD-II engine is already operating in Pune through Pune Mahanagar Parivahan Mahamandal Limited. The bus, which would be used for public transport by daily commuters in the city was unveiled by Dharmendra Pradhan, Minister of Ministry of Petroleum and Natural Gas as well as Piyush Goyal, Minister of State with Independent Charge for Power, Coal, New and Renewable Energy and Mines. Girish Wagh, Head, Commercial Vehicles Business, Tata Motors, said, “Tata Motors has been at the fore front in pioneering latest technologies and providing smart city solutions in the commercial vehicle industry. We are delighted to present yet another product with innovation in alternate fuel technologies, to cater to the need for a greener country. The use of Bio-CNG will contribute in a positive manner to the Smart Cities proposition of keeping them clean and is a good option for wet garbage management.”

The company has been developing their buses, the Tata Marcopolo, for public transport solutions for India for a considerable time now and has introduced a number of new safety technologies for CNG engines. These include sequential gas injection technology, skip fire, plug type coils, long life spark plugs and longer oil drain intervals compared to conventional diesel engines. Since a substantial number of buses ply through major cities in the country, shifting to an alternate fuel that produced low or no emissions reduced the carbon footprint in a certain city. At the occasion, Rajendra Petkar, Head – Power System, Engineering, Tata Motors said, “The showcase of the Bio-Methane bus is a step towards developing environment-friendly vehicles. Bio-methane is produced out of bio-degradable materials like kitchen waste. This gas, which gets produced out of natural degradation process, escapes into the atmosphere unused. However, if this is trapped and used in engines, it reduces the net impact on the environment and at the same time produces useful power.”

Use of alternate fuel for commercial vehicles has been a prime concern with regards to the high pollution levels in major cities including the National Capital Region. The use of bio-methane for buses within a city will reduce emissions as these elements are bio-degradable materials which degrade over a period of time.