Renault Captur will get projector headlamps with LED DRLs, LED tail lamps and new 17-inch alloy wheels. It will be positioned as a crossover and will compete with the Hyundai Creta and the new Maruti Suzuki S-Cross. 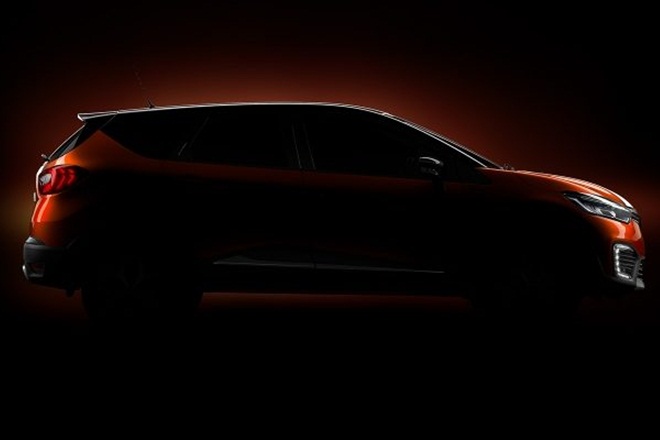 Renault India has officially teased the all-new Captur on its official YouTube channel that is expected to be launched in the country in the next few weeks. Before its launch, the company will unveil the new Captur in India on 21st September. The official teaser videos have revealed that the upcoming crossover will get a sleek design with projector headlamps, tail lamps, chrome finished front grille and new alloy wheels. The car is already available in European and Russian markets. In Russia, it is available with the name Kaptur, however, we will get the same model but it will have Captur badging and is different from the European version.

The new Renault Captur is based on Duster’s platform and will be positioned above it in the carmaker’s model lineup. The Captur, in addition to the design traits mentioned above, is also expected to get a sculpted hood, black skid-plates and 17-inch alloy wheels.

Although the company has not revealed the interior of the Captur, we expect it to feature a 7-inch touchscreen infotainment system that will be compatible with Bluetooth, USB and AUX and Android Auto. Apart from this, the upcoming Captur will get steering mounted controls for audio, automatic climate control and a flat-bottomed steering wheel. The cruise control is also likely to be available in higher versions. The safety equipment will consist of ABS (Antilock Braking System) with EBD (Electronic Brakeforce Distribution) and dual front airbags.

The new Renault Captur for the Indian market will be powered by a 1.6 litre petrol engine and a 1.5 diesel unit. The petrol engine will produce 103 hp and 148 Nm, while the diesel engine will be available in two states of tunes – 85 hp and 110 hp of maximum power. The engines will be paired to a 6-speed manual and an automatic gearbox (AMT) and some variants of the crossover will get an AWD (all-wheel-drive) system.

Also Read: Renault Captur vs 2017 Maruti Suzuki S-Cross vs Hyundai Creta: Can the Creta take on these formidable competitors set to be unveiled this month?

Renault is expected to price the new Captur between Rs 9 lakh and Rs 14 lakh, ex-showroom and it will compete with the likes of the new Maruti Suzuki S-Cross and the Hyundai Creta. The company will manufacture the Captur at its Chennai plant in Tamil Nadu.