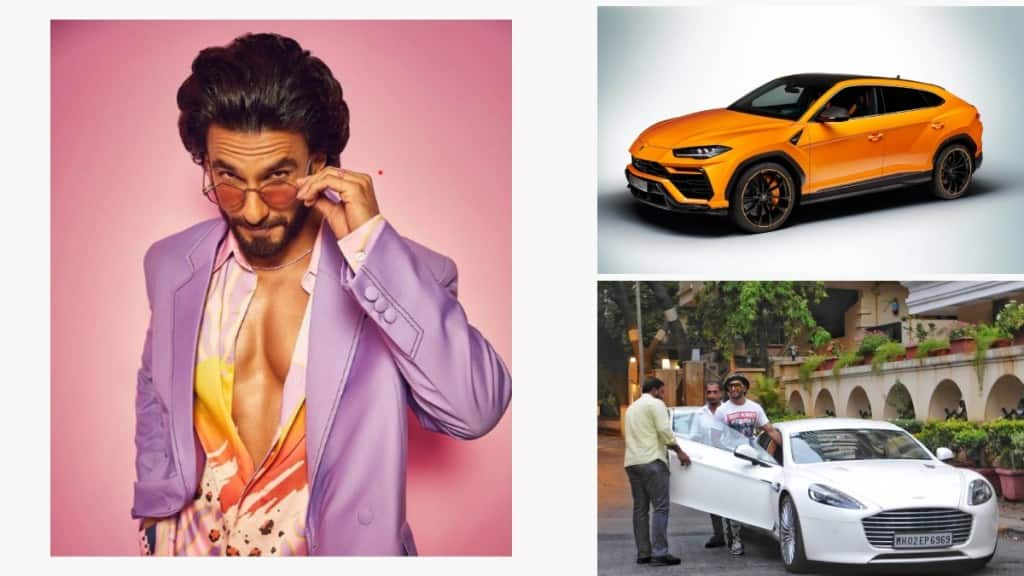 Ranveer singh, one of the self-made superstars of B-Town specially known for his charismatic on-screen presence and a flamboyant dressing sense. He is also a car enthusiast, Ranveer owns several super luxury rides including Aston Martin Rapide S , Range Rover Vogue etc. Here is the detailed list of cars he owns.

Ranveer singh is a proud owner of Range Rover Vogue. The luxury five-seater SUV features a spacious interior, advanced off-road capabilities, and a range of powerful engines. It is often considered to be one of the most luxurious and capable SUVs on the market.

Range Rover Vogue is powered by a 3-litre V6 diesel engine that churns out 244bhp and 600 Nm of torque.

Ranveer bought the Pearl Capsule edition of the Lamborghini Urus in 2021, The Pearl edition is a special and exclusive version of the Urus, characterised by a unique paint scheme. Singh chose the Arancio Borealis shade of his Urus. The Pearl Capsule Edition gets massive 22-inch alloy wheels with body-coloured brake callipers.

India’s first super SUV is getting power from the 4-litre V8 twin-turbocharged petrol engine which is good to deliver the power output of 641bhp and a peak torque of 850 Nm.  It also gets an AWD system and an 8-speed automatic transmission. The Urus can do 0-100 kmph in just 3.6 seconds and can reach a restricted top speed of 305 kmph.

Among the other luxury cars, Ranveer Singh’s also owns a stratus white Aston Martin Rapide S, which is the carmaker’s first four-door offering. Ranveer bought the same on his 32nd birthday. Aston Martin Rapide S is famous for its sleek, aerodynamic design and exceptional performance on the road.

The luxury four-door sports car is powered by a 6-litre V12 petrol engine that produces 552bhp and a peak torque of 620 Nm, mated to an 8-speed ZF automatic transmission.  The Rapide S can hit a top speed of 327 kmph and it can hit a ton in just 4.2 seconds.

Mercedes-Maybach GLS 600 4Matic is Ranveer’s go-to car, mostly he is spotted in this German beauty. Mercedes-Maybach GLS 600 4Matic is a five-seater luxury SUV powered by a 4-litre V8 bi-turbo engine that produces 542bhp and a peak torque of 730 Nm, paired with a 9G-Tronic automatic transmission. The luxury SUV can clock from 0-100 kmph in just 4.9 seconds and has a top speed of 250 kmph.

Jaguar XJL also adorns Ranveer Singh’s garage. There were reports in the past of Ranveer Singh selling his Jaguar XJ L. It is a long-wheelbase version of the standard Jaguar XJ model, offering additional legroom and space for passengers in the rear seat.

The luxury sedan is available with a variety of engine options, including a 3-litre V6, a 5-litre V8, and a hybrid powertrain. It also features a number of luxury amenities, such as a touchscreen infotainment system, leather upholstery, and a panoramic sunroof.