Post-Lockdown Road Trip: 5 things we learnt in the Jeep Compass

As the nation began normalising post the coronavirus pandemic, we decided to see how managing road trips in India have changed. If in fact, anything has even changed. We took the Jeep Compass for a road trip to the hills and here is what we learnt.

Jeep Compass on the twisty roads from Mussoorie to Dhanolti

The coronavirus pandemic was a catastrophic blow to the world. In India, businesses — small or big, were impacted heavily by the lockdown. Everyday lifestyles had changed for most of us. But it was believed that smaller cities and towns around the country would have faced similar or even heavier blows to their livelihood. So once Indian states started opening up, we decided to take a long weekend from the monotony of working from home to gain another perspective on life. Taking all the necessary precautions of course to keep ourselves and the people around us safe. A quick call to our friends at FCA India allowed us to experience all of it from behind the wheel of the Jeep Compass.

While rules in most parts of the country would vary and change over time, our trip took place around mid-November. At the time, travelling from Delhi to Uttarakhand was unrestricted. No covid tests required, no permits were needed. Traffic was smooth flowing and unhindered by any roadblocks. We decided for a quick sibling weekend getaway from Delhi to Dehradun, with visits to Mussoorie, Landour and Dhanolti planned. The staple quick road trip for Delhites. We set off at sharp 5 am from Delhi to be the traffic with a quick stop for coffee at Midway. At 10 am, in exactly 5 hours we checked in at our pre-booked hotel. On a side note, we never sensed any fatigue from the long drive and the Jeep Compass did its job silently, without a fuss.

For lunch and other meals over the course of the trip, we sampled all the special spots we knew of in Dehradun and Landour. Lunch on day 1 was spent at a cosy little outdoorsy cafe called Raazmaataaz. The marine style themed restaurant had much quirky design to it. More importantly, the food was quite decent and fairly priced. But it also had some impressive list of healthy dining options. The next day, on our drive up the hills to the small yet beautiful town of Landour, we found ourselves stuck in traffic due to the throng of tourists who also had plans similar to ours.

Eventually, for a spot of lunch, we visited the old and popular Rokeby Manor — a British country style property that offered impeccable views of the mountainous landscape. The property offered period-correct ambience, and food to complement the chilly weather and the stunning views. Being a premium property, pricing was expectedly at par. Complaints about the food, we had none. Interestingly enough, social distancing norms were fairly loose in most areas. But the lack of crowd indoors meant it was still safe as seats and table were frequently sanitised.

Like we mentioned before, it took us just 5 hours to reach Dehradun from Delhi. Mostly because the Compass devoured the distance, but partly down the improvements Indian national highways have seen over the recent past. From Delhi, we took the route through Saharanpur and the tarmac surface was sublime all through. However, road signs and intersections, in addition to lighting in the dark on highways really needs an enormous amount of improvement. For our return to Delhi, we trusted Google Maps as we were unfamiliar with the terrain. The locals and the GPS suggest us to take the alternative route through Haridwar. This road was unfinished all the way to Roorkee. Pretty much off-roading our way through, this stretch of road was a contrast of where our Indian Roads have come from, while our earlier drive showed how far we have come. A word of advice for anyone travelling in this direction, avoid this stretch for the next year or so at least. 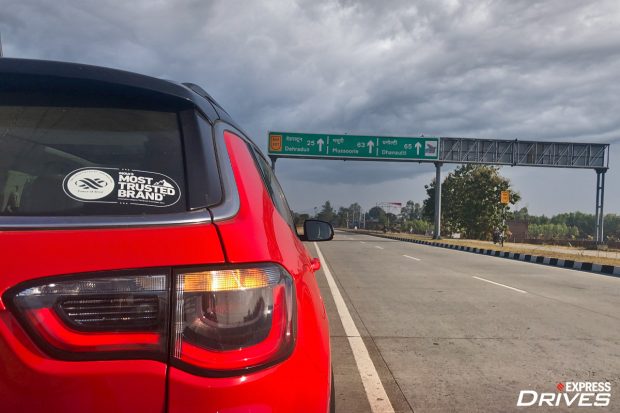 Guided by the Compass

Through the hills, the Compass offered remarkable levels of comfort to travel in. And driving it was extremely easy. While it was large enough to offer enough comfort inside, it was compact enough to drive it through the narrow winding roads of Landour. As we had some time on our hands, we turned the nose towards another sublime stretch of road which connects Mussoorie to Dhanolti. Driving the Compass through the hills was a joy. However, there were a couple of issues I did notice. Firstly, when it got dark up in the mountains, the small cornering lights had little to contribute. Additionally, that 2.0-litre turbo diesel although beautiful to drive and the transmission as slick to shift, it wasn’t the most efficient in covering 850kms and averaging just under 12km/l. But the stability of the Compass offered on the highway at high speeds is quite commendable

I have been one of the biggest opposers for the love Indians have for sunroofs in vehicles. However, on long journeys, I have come to realise their benefits. Previously, on a more arduous trip through Spiti carrying extra fuel, leaving the sunroof open meant we didn’t have to inhale the fumes. Coming back to the Compass and its large panoramic sunroof, the cold weather meant we needed the heating, but that also meant a fogged-up windscreen at night. So a partial opening of the sunroof meant that the hot air could ease its way out from above, and us not having to roll down the window. Additionally, during the day in the lovely weather, we could keep the windows rolled up, and still breathe fresh clean air which is not available in abundance in Delhi.

The Compass we drove is now on its way out. A brand new model is geared up to be launched with a revised look and even more plush interior. If the benchmark set by the old model is anything to go by — the new Compass can only get better. But we shall reserve our judgement on that till we drive it.