Carving out the world’s largest outline of a map with the Nissan GT-R at Sambhar, Rajasthan, the supercar drew the map of India just ahead of the 68h Republic Day 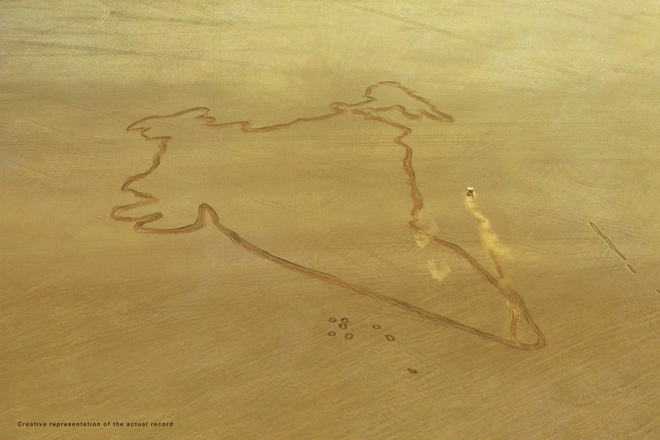 When Nissan plans to pay respect to India with a GT-R, it has to something record breaking. So, in Sambhar Lake, Rajasthan, is a Nissan GT-R tearing through a large dry section. But, for what? To carve the world’s largest outline of a map. Just ahead of the 68th Republic Day, Nissan has released an official video where the outline of India’s map was drawn with the Nissan GT-R. An area of approximately three sq km was chosen where the coordinates were mapped out into the supercar’s GPS in order to get the perfect outline. Behind the wheel was ace rally driver Rahul Kanthraj and this feat has enabled the company to enter into the Limca Book of Records for the world’s largest-ever outline of a map. The soft soil enabled the drones and onboard cameras capturing the outline to get a proper impression. Once the record is certified, it will be added to the 2018 Limca Book of Records.

Also Read: Why the Nissan GT-R is known as ‘The Godzilla’

Powering the Nissan GT-R is a hand-built 3.8 litre twin-turbo V6 petrol motor that generates 565 hp of power and 637 Nm of torque. This engine is mated to a dual-clutch sequential transmission that can execute a gearshift in 0.15 seconds. In addition, the powertrain has the support of the ATTESA E-TS all-wheel-drive system that can send 50 percent of the power to front wheels when needed. Combined with a 50/50 front and rear weight distribution, the GT-R carved out the map beautifully according to the video.

In addition to the power, the Nissan GT-R also has different driving modes which tweaks the suspension as per the driver’s need. The design of the supercar is more function than form as it is evident from the coefficient of drag of 0.26. In terms of safety, it is offered with six dual-stage airbags, seat belt pre-tensioners with sensors, VDC (Vehicle Dynamic Control), traction control, ABS (Anti-lock Braking System) with EBD (Electronic Brakeforce Distribution), TPMS (Tyre Pressure Monitoring System) and more. Priced at Rs 1.99 crore, ex-showroom, the 2017 Nissan GT-R has achieved a number of records including being one of the fastest cars to finish one lap at the Nurburgring in a little over seven minutes in its Nismo update. The new record, if approved will be another addition to the feats achieved by ‘The Godzilla’.