New 2017 Hyundai Xcent launched with a new interior and exterior features. The new Xcent is powered by a new 1.2 litre diesel engine. 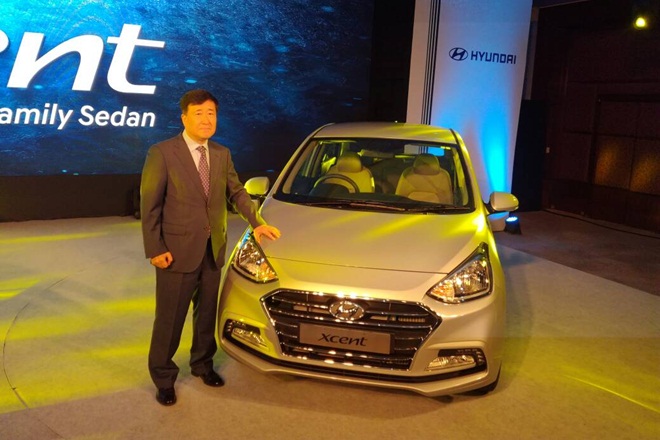 Hyundai has launched the new 2017 Xcent in India at a starting price of Rs 5.38 lakh, ex-showroom, Delhi. The new Hyundai Xcent is available in a choice of five trims in both petrol and diesel – E, E+, S, SX and SX (O). The 2017 Xcent competes with the likes of the upcoming 2017 Maruti Suzuki Swift DZire, Honda Amaze, Volkswagen Ameo, Ford Aspire and the Tata Tigor.

Hyundai has offered the higher variants of the Xcent with new features and the exterior now features DRLs (Daytime Running Lamps) and fog lamps. One of the major highlights inside the cabin is a new 7-inch touchscreen infotainment system which is compatible with Apple CarPlay and Android Auto along with Bluetooth. The multi-function steering wheel now gets voice recognition. The dual front airbags, ABS (Antilock Braking System) and Alternator Management System (AMS) are available as a standard equipment.

The new 2017 Hyundai Xcent is powered by a new 1.2 litre diesel engine that produces 73 hp of power and 190 Nm of torque. This diesel unit also powers the new Hyundai Grand i10 in the country. The petrol variants get the 1.2 litre petrol unit that develops 81.8 hp of power and 114 Nm of torque. The petrol engine is mated to a 5-speed manual as well as an automatic transmission, while the diesel is paired to a 5-speed manual gearbox.