These two models bring the tally of AMGs on offer in the country to a phenomenal nine and their SUV portfolio to eight. 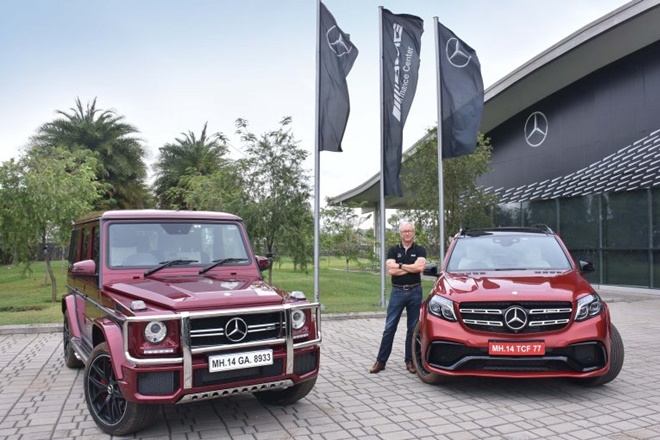 Earlier this week Mercedes-Benz went on Twitter talk promising to, and I quote, hashtag shake the earth. We all assumed there was going to be a swansong special edition to the G-Wagon, which is expected to be leaving the production line next year. Turns out Mercedes-Benz wasn’t joking when they said shake the earth. What they did was ever so quietly launch two absolutely insane SUVs from their AMG-division.

The two 3 tonnes SCUD missiles in question are the Mercedes AMG GLS 63 and the Mercedes AMG G63 ‘Edition 463’. The latter being the swansong special edition we had anticipated. They now bring Mercedes Benz’s SUV offerings in the country to eight and their AMG portfolio to nine. Eight SUVs! That’s a helluva milestone for Mercedes-Benz India!

Which brings us to the two cars in question. First up, the Mercedes-Benz G63 ‘Edition463’, not that the G-Wagen needs to be made any more special considering each one of them is immaculately hand-built engine up. The Edition 463 retains the original 550bhp 5.5 litre V8 and gets a few details on the cosmetic front including a stainless-steel underride guard and some sweet 5-spoke 21 one inch alloys, and AMG Sports strips on running down the sides. It also gets designo leather seats in black and brown with stitching to match. The 463 refers to the Mercedes’ internal model code for the AMG in case you were wondering.

The GLS63 AMG is the result of the good people at Graz, Austria, Home to Mercedes Benz’s AMG division, getting their hands on the GLS which is already on sale in the subcontinent. The result is almost three and a half tonnes of weaponized SUV that can get from rest to a hundred in about five seconds. Although the GLS shares its 5.5 litre V8 Bi-turbo motor with the G63 it’s been fettled (as if 563 bhp wasn’t enough) to make an additional 13 hp to bring the tally to 576 odd-horsepower. Which is phenomenal.

As far as creature comforts are concerned, the GLS will get an AMG steering wheel finished in Nappa leather, temperature controlled cup holders and multi-contour front seats with massage functions. Add to that the Thermotronic automatic climate control, memory package as well as a Harman Kardon Logic 7 surround system and it is not short on any luxury. However, the GLS63 AMG does come at an eye-watering Rs. 1.57 crore. Although for that price, you could make some very fast machines look very very slow while you sit in your three and a half tonne leather clad SUV, and that seems worth every penny.