Hyundai Santro and Shah Rukh Khan’s relation is over 20 years old and at the launch of the all-new Santro, SRK did get candid and emotional about him being the SantroWalla. 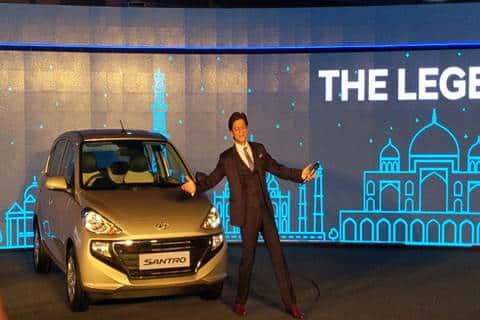 My Santro is Back! were the words quoted the famous Indian celebrity Shah Rukh Khan as he took the centre stage at the launch of the all-new Hyundai Santro in India. Shah Rukh Khan has been the brand ambassador for the Santro brand ever since its inception in 1998 and for 20 long years now. Hyundai Santro was the first car from Hyundai Motor in India and ever since then the company has been very successful and is now the second biggest carmaker in India. The association of Shah Rukh Khan and Hyundai started in 1998 and over the years the star has been the face not just for the Santro brand but for Hyundai Motor India.

Also Read: 2018 Hyundai Santro Manual Review: The Indian small car icon is back with a bang!

At the price announcement of the all-new 2018 Hyundai Santro, SRK thanked the whole Hyundai team and gracefully said that he is one of the oldest employees of Hyundai in India. Not often we see brand ambassadors talking so affectionately about the product their endorse but then there is SRK, he spoke like he owns the company and the strong 2 decades old bond was blooming as he spoke very passionately about the Hyundai Santro.

SRK further shared his nostalgic memory on how a team from Hyundai came to him back then with the idea of him promoting the car and the brand. “For me, I was a young actor, I was trying to figure my life and how to earn money and how to look after my family. Advertising a product was a new concept. Hyundai came and explained to me about the Santro in 1998 and how this Korean company is investing so heavily on a large scale. Now after 20 years, we are the second biggest carmaker in India and the largest exported from the country.” He further said that 20 years is a long association and he loves his Hyundai family.

On the Santro brand, Shah Rukh Khan says that at times he thinks he doesn’t have 3 but four kids. Shah Rukh Khan said that “My eldest son (Aryan Khan) is soon turning 22, my daughter (Suhana Khan) is 18 and will turn 19 and the youngest son (AbRam) is 5 years old and will turn 6 and then I have this 20-year-old tall boy Hyundai Santro.” Over the last two decades, Hyundai Santro has been called the Sunshine car, the family car and Shah Rukh Khan has been called as the Santro walla. This is the longest association of Shah Rukh Khan with any brand, in fact, he even mentioned that the only other longer and stronger relation he has had is with his wife Gauri Khan.

Hyundai Santro is here to relive its past glory. The car has already seen a sales of over 1.52 million units in India and the company will build on its past success with the new Hyundai Santro. Shah Rukh Khan has been the Hyundai’s biggest supporter and ambassador and for many more years to come SRK will continue to be called as the Santro Walla.