The compact SUV has achieved sales of more than 1,10,000 units in its first year since launch. 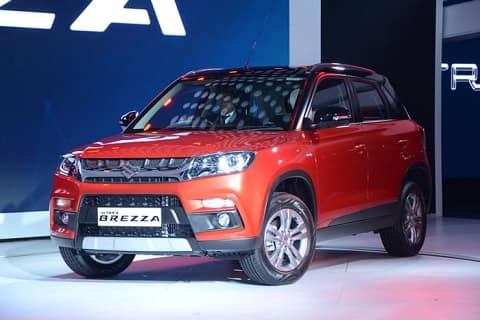 Maruti Suzuki Vitara Brezza has emerged as the most popular SUV in the country, not just in terms of sales but also in terms of awards received. The compact SUV has achieved sales of more than 1,10,000 units in its first year since launch. The vehicle also received more than 25 different awards within this year, reflecting the strong performance of the vehicle in multiple aspects.

Speaking about the first year, Kenichi Ayukawa, Managing Director and CEO, Maruti Suzuki, said “We thank our customers for making Vitara Brezza the highest selling SUV. Within a short span, Vitara Brezza has redefined the urban SUV segment in India. Vitara Brezza brings the muscle, glamour and style that were so far missing in this segment. Class leading features, personalisation, outstanding fuel efficiency and an attractive price make Vitara Brezza a delight for customers.”

The Vitara Brezza was conceptualised, designed and developed by Maruti Suzuki in India, using the Baleno’s global platform from Suzuki. The compact SUV is also the only vehicle in the country to be certified for offset and side impact crash tests before the implementation of the upcoming safety norms.

The Vitara Brezza is presently available only with a diesel engine, the familiar 1.3 litre DDiS 200 unit, which develops 88 hp and 200 Nm of torque. Although, there is no petrol engine on offer right now, we expect the company to launch a petrol version of the Vitara Brezza sometime later this year.

The vehicle has proven to be a hit among buyers of different age and backgrounds, partly due to the extensive customisation options available. Choosing from a range of 500 different accessories, customers get a wide range of options to personalise their vehicles, something young buyers today are inclined towards.