After successfully launching the Maruti Suzuki Vitara Brezza only with the diesel engine, the homegrown car maker is now planning to launch the petrol-powered Vitara Brezza in India. 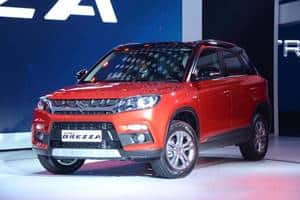 After successfully launching the Maruti Suzuki Vitara Brezza only with the diesel engine, the homegrown car maker is now planning to launch the petrol-powered Vitara Brezza in India. The car manufacturer has also managed to sell around 17,382 units of the compact SUV, which has overtaken the Ford EcoSport as the preferred compact SUV in the country.

Despite being offered in the diesel trim, the compact SUV has managed to win the hearts of customers. In order to offer customers with more engine options, Maruti Suzuki is planning to launch the Vitara Brezza with petrol engine in 2017. The decision to launch the petrol Brezza could also be motivated by the recent developments, wherein prices of petrol have been reduced and as a respite from the rising fuel prices, more and more people are now opting for petrol-powered vehicles. The tough stance of NGT against diesel vehicles has forced some people to change their choice from diesel to petrol.

The major change that will make its way to the petrol-powered Vitara Brezza will be the engine option. Under the hood, the car maker is expected to equip the car with the Boosterjet petrol engine and is expected to be offered in three trims namely, LXi, VXi and ZXi. The Boosterjet motor is said to be imported to India. This new unit could give a tough competition to the Ford EcoSport’s 1.0-litre EcoBoost engine if policy-environment stays positive towards petrol and Maruti Suzuki prices the Vitara Brezza petrol competitively.

The 1.0-litre Boosterjet turbo-petrol unit will produce around 110 hp of maximum power and 170 Nm of torque, which is expected to deliver around 22 kmpl of fuel efficiency. Just like the diesel-powered Brezza, the petrol Brezza will send its power to its two-wheel drive system. This means, no all-wheel drive variant on the cards. The engine is expected to be paired with a 5-speed manual transmission. The same engine is likely to be powering the upcoming Maruti Suzuki Baleno RS. As the new powertrain will be imported into India, it might lead the automaker to price the petrol-powered compact SUV slightly higher than the diesel model.

Just like the diesel-powered compact SUV, the petrol Brezza is likely to get the same design and styling along with the dual-coloured body paint. The Vitara Brezza petrol is expected to sport the the same set of alloys, aggressive-looking front grille coupled with neat projector headlamps, attractive and sculpted front and rear bumpers and sporty side profile.

Onto the interiors, Maruti Suzuki will keep the interiors similar to that of the current model. The current Brezza has a spacious cabin and the interiors also feature piano finished accents. The rear seats can be split and folded into 60:40 ratio. This makes adequate rear space to carry your luggage for a week long journey or a bicycle. Not just this, the compact SUV also has a large boot space of 328 litre.

The cockpit of the car also looks stylish and attractive as it is offered with five instrument cluster mood lights to set your mood while on the go. The company’s Smart Play infotainment system with Apple CarPlay support and satellite navigation will make sure that the passengers can sync their phone with the system to make calls, receive messages, listen to music, without getting distracted while driving. The same infotainment system is also expected to be offered in the Brezza petrol.

Watch this space for more information on the Maruti Suzuki Vitara Brezza petrol.