Even before the introduction, the Maruti Suzuki Ignis had over 15,000 bookings and is garnering popularity in its segment 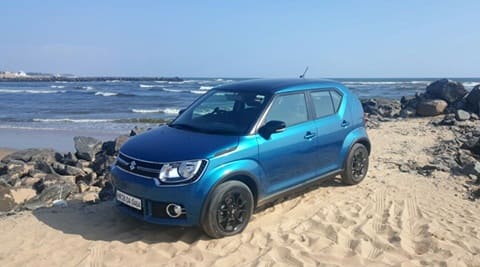 Waiting period of a vehicle results due to the high demand versus inadequate supply by a manufacturer. In most cases, the waiting period of a certain product is due to an aggressive price tag as well as a long list of features that competitors cannot provide at that retail. Maruti Suzuki has been known to provide a list of features that come at a premium in competitors and the recently introduced compact crossover, the Ignis, has now run into a waiting period of up to three months, according to a Nexa dealership in Delhi. While the higher versions, Delta, Zeta and Alpha have a lesser waiting period of 4 to 8 weeks, one would have to wait up to 12 weeks or three months for the base Sigma version. This waiting period is the same for the petrol as well as diesel variants.

Read about: Maruti Suzuki Ignis Review: Unconventional, funky but should you buy it?

Even before its launch in India on 13th January, 2017, the Ignis attracted the young buyers of the country, thanks to its unconventional design and a rich feature list, which wasn’t witnessed on previous Maruti Suzuki cars. The result of this design language was that the car’s bookings ran over 15,000 units before the official price announcement. In order to keep in sync with a distinctive appeal of the compact crossover, the company has also offered a host of accessories that go in line with the car’s ‘None of a Kind’ marketing strategy. These accessories include factory fitted roof wraps and exterior colour coded elements inside the car such as door handles and the centre console. In addition to the additional accessories, the top-end trims also have a dual-tone exterior colour option along with the interior colour coded elements. This scheme is however, limited only to two colour options, Uptown Red and Tinsel Blue.

Maruti Suzuki is producing the Ignis from its Gurugram facility and has a capacity of rolling out a maximum of 5,000 unit per month. In January itself, the company sold 4,830 units, however, it is currently not enough the meet the rising demand. That said, the company’s new Gujarat plant that has commenced operations should ease the production pressure and reduce the waiting period on the Baleno, Vitara Brezza as well as the Ignis. At the recently launched performance hatchback, the Baleno RS, officials stated that 1,000 units of the Baleno are already being produced and once the facility is fully operational, over 10,000 units would be rolled out each month.

The new Swift is also expected to be launched by mid this year which, like other popular Maruti Suzuki cars, has already grabbed the attention of potential buyers. However, by the time the premium hatchback is introduced, the company’s Gujarat manufacturing facility should be at its full first phase production capacity and able to produce 2.5 lakh units annually, thereby resulting in a lesser or negligible waiting period for the cars that have currently run into one.