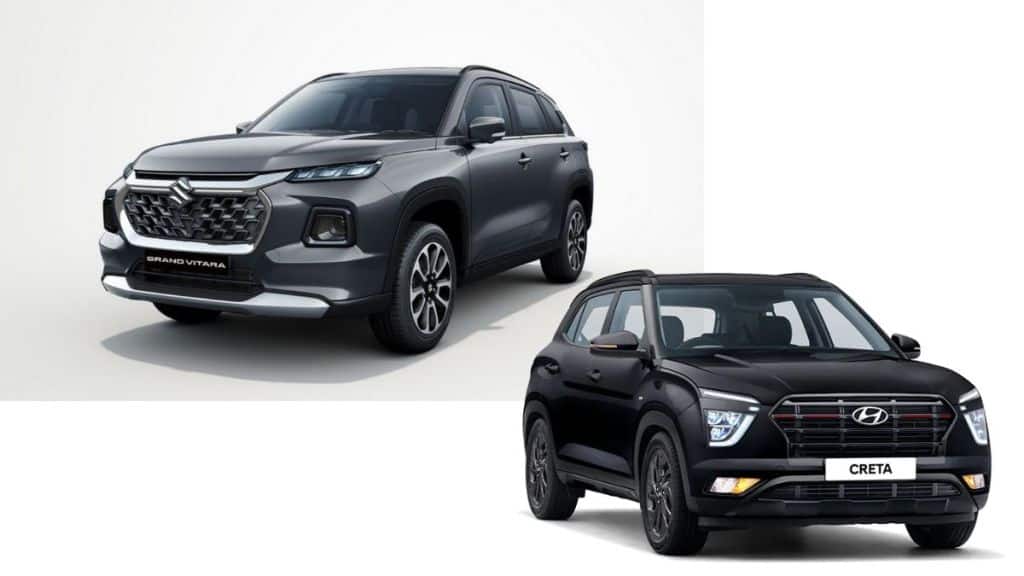 The mid-size SUV market in India is an intense segment with vehicles from manufacturers such as Hyundai, Kia, Nissan, Skoda, Volkswagen, and Toyota, however, the most popular mid-size SUV in India is the Hyundai Creta, which has enjoyed being at the top of the sales charts for many years. Now, however, there is competition.

We compare the 2022 Maruti Suzuki Grand Vitara against the Hyundai Creta in terms of dimensions, features, engine specs, safety, and more.

Maruti Suzuki has not revealed pricing for the new Grand Vitara, however, as per leaked pricing on its website, we can expect the SUV to be ~Rs 9.5 lakh onwards (ex-showroom). The carmaker will announce the official pricing in September, just ahead of the festive season. Bookings for the 2022 Grand Vitara are open at Rs 11,000.

The Hyundai Creta is priced between Rs 10.44 lakh and Rs 18.18 lakh, ex-showroom Delhi. The base variant of the Grand Vitara undercuts the Creta by almost Rs 1 lakh. Expect Maruti Suzuki to keep the pricing as competitive as possible, because the Grand Vitara is an important product for the carmaker.

The Maruti Suzuki Grand Vitara portrays a butch SUV stance with a straight grille, squared wheel arches, plastic body claddings, and sleek headlights. Overall, the Vitara is sporty but manages to retain its SUV design well. Although the new Grand Vitara is based on the same platform and is the same vehicle as the newly-unveiled Toyota Urban Cruiser Hyryder, they do have their similarities and differences.

The Hyundai Creta is all about sleek lines and sportiness. It features a large front grille with headlights placed in the lower half of the front end while managing to portray a modern SUV silhouette.

When looking at dimensions, the Maruti Suzuki Grand Vitara is longer, wider, and taller, meaning more interior room. The Hyundai Creta, however, has a longer wheelbase.

Both vehicles offer multiple engine choices. The new Maruti Suzuki Grand Vitara is offered with two petrol engines — a 1.5-litre mild hybrid and a 1.5-litre strong hybrid. The former is paired to either a 5-speed manual or a 6-speed automatic with paddle shifters, while the latter is mated to an eCVT gearbox. Also, Maruti Suzuki claims a mileage of 27.97 kmpl, which is the highest for an SUV in India.

The Hyundai Creta is offered with three engine options — 1.5-litre petrol, a 1.5-litre diesel, and 1.4-litre turbo petrol. Gearbox choices include a manual, automatic, an iMT, and DCT.

On paper, the Hyundai Creta is more powerful in every segment, and the turbo petrol is in a class of its own. However, Maruti Suzuki has a trump card — the Grand Vitara is available with an All-Grip all-wheel-drive-system with different modes, making it the only SUV apart from the Hyryder in this segment. Maruti Suzuki claims that customer demands were strong for an AWD SUV, hence the decision.

Safety features on the 2022 Grand Vitara vs Hyundai Creta