It’s suave, stylish, and dynamic yet an SUV. We deep dive into what the new Maruti Suzuki sub-4-metre SUV, the Fronx is all about and reveal what the name means. 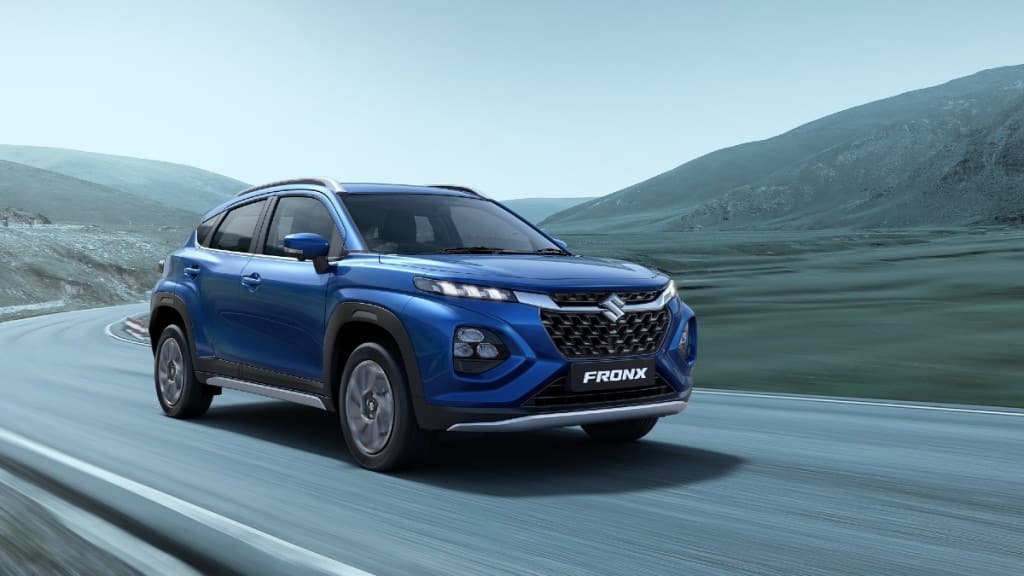 In the realms of the automotive world, the Titan class undoubtedly is the SUV segment that can be further broken down into smaller elements based on its utility, design and size. Even though India’s number one car manufacturer had been tantalizing Thanos aka the Jimny for over a decade, Maruti Suzuki had quietly trademarked the recently unveiled SUV’s name, Fronx way back in 2014. While the world was in a frenzy about whether the hardcore 4×4 Jimny would be sold as a 3-door or a 5-door in India, Maruti Suzuki was quietly forging the dynamic-looking Fronx in our backyard.

The Fronx is Nexa’s entry-level SUV, which is targeted at those looking for a value-for-money car that has an oomph factor like no other.

In the words of the legendary former manager of Arsenal football club Arsene Wenger, “The only way to score is with the handbrake off!”. This is exactly what Maruti Suzuki is doing by going all out to become the leader in the SUV segment by offering something different and refreshing. The uniqueness starts with the name itself, which is shortened to Frontier Next. What really works for the company is the brand recall it commands and the short catchy nameplate of the Fronx that easily sticks to your mind.

The Fronx may be called many different things — a crossover or a compact SUV, but we see it more as a coupe SUV, which is a first of its kind. Maruti Suzuki wanted to design a driver-centric vehicle, which doesn’t compromise on aerodynamics, hence, the swooping roofline. This also makes the Fronx boast a dynamic road presence that will attract a lot of young customers and even first-time car buyers.

Maruti Suzuki has married the unconventional sleek suave looks with the DNA of an SUV. From the front, the Fronx is quite upright and sports Nexa’s signature all-black grille with a chrome strip connecting the tri-claw LED DRLs. The layout is familiar to the Grand Vitara and hence continues with the split headlight configuration. Adding to its high visual presence is the three-prong LED headlamp cluster which sits above the lower apron.

The Fronx manages to flex some serious brawn with silver finish skip plates in the front and the rear and the sleek silhouette with bulging square-shaped wheel arches.

The rear showcases the Fronx premium design ethos with a rear roof spoiler and eye-catching connected LED rear lamps that run across the tailgate, a first for a Maruti Suzuki vehicle. The bumper area again showcases its SUV DNA with a muscular and in-your-face chunky silver skid plate. From the rear, one also notices the Fronx’s tall 190mm stance.

The Fronx is available in two engines, the 1-litre Boosterjet and the tried-and-tested 1.2-litre Dual Jet. Let’s first talk about the former powertrain as Maruti Suzuki brought back the 1-litre turbo petrol, which used to power the erstwhile Baleno BS and was continued a couple of years ago. This engine certainly will give the Fronx a big boost in terms of performance as it has an output of 99bhp and an impressive torque of 147.6 Nm. It is available in either a 5-speed manual or a 6-speed automatic torque converter with paddle shifters. The Boosterjet version comes in three trims — Delta+, Zeta and Alpha.

The warhorse 1.2-litre naturally aspirated engine churns out 88.5bhp and 113 Nm of torque. This engine is more focused on efficiency and is mated to a 5-speed manual transmission or a 5-speed AMT. The NA engine is available in three variants — Sigma, Delta and Delta+.

A word on the interiors as Maruti Suzuki has spruced it up with a black and Bordeaux dual-tone colour combination. It comes standard with a 7-inch infotainment touchscreen, but the Alpha trim gets a bigger 9-inch display along with Arkamys music system. It comes equipped with plenty of features based on the variant like a Head-up display, 360-degree camera, wireless Android Auto and Apple CarPlay, wireless phone charger, connected features and much more. It also gets an array of safety features like 6 airbags for the top trim, ISOX child seat anchorages, ABS and EBD, Hill hold assist, Electronic Stability Program etc.

Maruti Suzuki has already opened the bookings for the Fronx and the sale is expected to start in the new financial year, April. The Fronx could to be priced slightly below the popular Brezza and is expected to crash the sub-4-metre SUV party.