The Toyota Rumion breaks cover in the South African market. It is a repurposed version of the Maruti Suzuki Ertiga MPV that is already on sale in the Indian market.

Maruti Suzuki and Toyota announced their strategic partnership with the launch of the Toyota Glanza in the Indian market, which essentially is the rebadged Maruti Suzuki Baleno. The Japanese carmakers have been using products from each other’s line-up for different markets. The latest development on this note is the Toyota Rumion. It is Toyota’s version of the Maruti Suzuki Ertiga. However, its existence currently is restricted to South Africa only.  The Toyota Rumion is priced from R 245,600, which is equivalent to Rs. 12.37 lakh. The range-topping variant is priced at R 317,200 (Rs. 15.98 lakh).

The buyers can settle down with either of the three variants – S, SX, and TX. Also, there are five colour options on offer, namely Mystic Pearl White, Azure Blue, Seal Grey Metallic, Autumn Blaze Red, and Shadow Black Pearl. The design remains unchanged on the Toyota Rumion. In comparison to the Maruti Suzuki Ertiga, the only change here is the new radiator grille. It is finished in chrome and gets three slats. Of course, the Maruti Suzuki and Ertiga badges are now swapped with the Toyota logo and Rumion insignia. 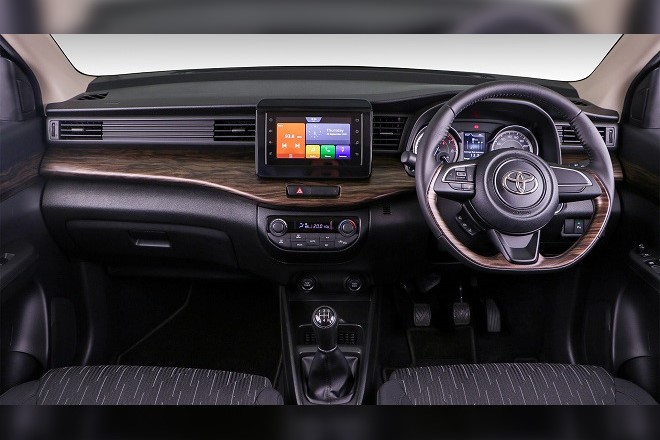 On the inside, Rumion features a dark appeal with wood inlays. However, the overall dashboard looks identical to the Maruti Suzuki Ertiga. The feature list also remains quite similar. It gets a touchscreen infotainment unit with Android Auto & Apple CarPlay support, along with automatic climate control, one-touch up-down function for driver window and more.

Talking of mechanicals, Toyota hasn’t changed anything on the Rumion, while it transformed from the Maruti Suzuki Ertiga. Under the bonnet sits a familiar 1.5L K-series petrol engine. The naturally-aspirated power plant is designed to belt out 103 Hp of peak power and 138 Nm of max torque. The engine can be mated to either a 5-speed manual gearbox or a 4-speed automatic transmission. Also, as per recent reports, Toyota is planning to launch a rebadged version of the Maruti Suzuki Ciaz in foreign markets.