Mahindra XUV700 unveil tomorrow: What to expect from new flagship

The Mahindra XUV700 will finally be revealed tomorrow. The new model will introduce a new era for the Indian brand. Here is what to expect from the new flagship SUV.

The Mahindra XUV500 has been a very popular model from the automaker. However, it has gone far too long in the tooth and has been begging for a replacement. Tomorrow, Mahindra will unveil its brand new flagship SUV — the Mahindra XUV700. Yes the XUV500 will be dropped from the lineup for now, but in its place will be an all-new model. Not to worry, the XUV500 name will return after a few years as a smaller SUV, but for now, it’s the new XUV700 we need to talk about.

The XUV700, will be Mahindra’s new flagship 3-row seating SUV. With the new XUV700, Mahindra will also introduce a new brand identity with an all-new logo. The XUV700 will be the first Mahindra model to carry the new “twin-peak” logo branding.

The Mahindra XUV700 will be offered as a 6-seat and 7-seat SUV. The automaker has been teasing its arrival with some cool tech it will pack like the panoramic sunroof, LED headlamps with C-shaped LED DRLs, LED tail lamps and of course, the new twin-peak emblem. From the test mules we have seen online, the exterior design will be an evolution of the older generation car. So even with the new design tweaks, the XUV700 will continue to be recognisable as a Mahindra XUV.

However, the cabin will see a major revision. Front and centre on the dash will be a dual 10.25-inch touchscreen infotainment system with Apple CarPlay and Android Auto. Natively, it will run the new Mahindra AdrenoX software and will use Amazon Alexa’s AI for voice command features. Sony has specifically designed the 3D sound system for the XUV700. Other features in the XUV700 will include cruise control, dual-zone climate control, keyless entry and more. 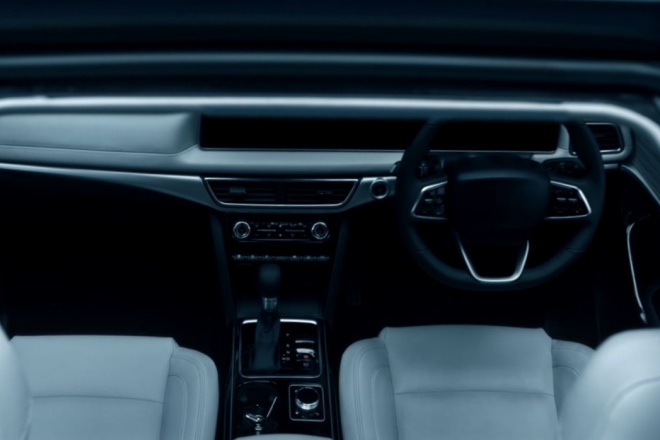 Among the safety features, the XUV700 will offer high beam assist, along with Level 1 autonomous drive tech with Advanced Driver Assistance Systems. It will be similar to what we find in the MG Gloster. To know more about the different levels of Autonomous drive technologies — Click here.

The XUV700 will use the same engine lineup as the Thar. It will have the 2.2-litre turbo diesel which is good for 130hp and the 150 hp 2.0-litre turbo petrol engine. A 6-speed manual transmission would be the standard gearbox option while an automatic will also be available with both engines. What remains to be seen is whether Mahindra will also offer an all-wheel-drive version of the XUV700.

None of the Mahindra XUV700’s rivals offers a 4×4 or AWD option due to the lack of demand. The XUV700 will compete against the MG Hector Plus, Hyundai Alcazar and the Tata Safari. On August 14, Mahindra will unveil the new XUV700. However, the model is only expected to be launched in September during the festive season. We will be driving the new model very soon, so stay tuned to Express Drives for our detailed review.