Mahindra KUV100 Electric confirmed: First EV to roll out in 2018! 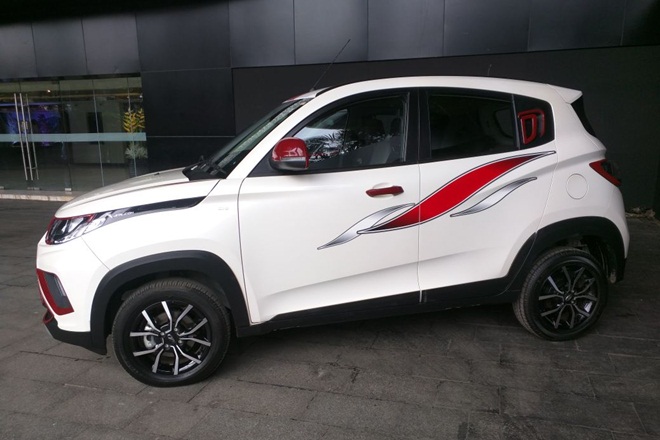 Indian automaker and currently the only electric car manufacturer in India Mahindra & Mahindra has confirmed that the company will launch an electric version of its Mahindra KUV100 will be launched in the Indian market in about one year. The company already has Mahindra E20 plus and Mahindra e-Verito electric cars in its portfolio and Mahindra KUV100 will be the next electric car/SUV from Mahindra. Dr.Pawan Goenka, Managing Director, M&M confirmed that the electric version of the KUV100 will come in one year and electric drivetrain will also be used in all future upcoming crossover vehicles manufactured by Mahindra. He also further added that tenders floated by central and state governments encourage companies to accelerate development of electric cars in India.

Mahindra & Mahindra along with Tata Motors recently bagged a tender from state-run Energy Efficiency Services Limited (EESL) which was to procure 10,000 units of electric cars. Tata Motors got the major chunk of the order and will supply over 70% of the total units. EESL claims that this was the largest single procurement of electric vehicles anywhere in the world. These electric vehicles procured from Mahindra and Tata will replace the existing petrol and diesel cars currently being used by the central government and its agencies over a 3-4 year period. Government’s move to electrify its car fleet shows how serious it is about electrification and slowly but steadily would also focus on developing infrastructure. Companies like Mahindra have been investing in electric cars for a long time now. In fact, currently, Mahindra is the only auto maker to have electric cars in its product portfolio which are manufactured at Mahindra Electric’s plant in Bangalore.

Also read: Electric cars for babus: Is it really Mahindra vs Tata Motors in Indian electric car space? Not really