Shockwave’s power comes from three jet engines. Three! Whoever came with the idea thought one or even two weren’t enough. Wonder if Jeremy Clarkson had anything to do with it. 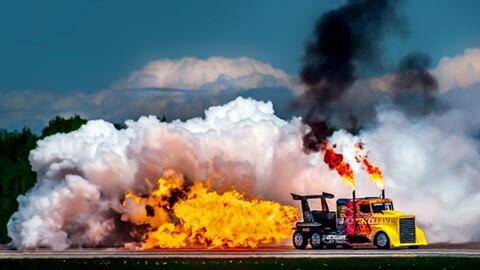 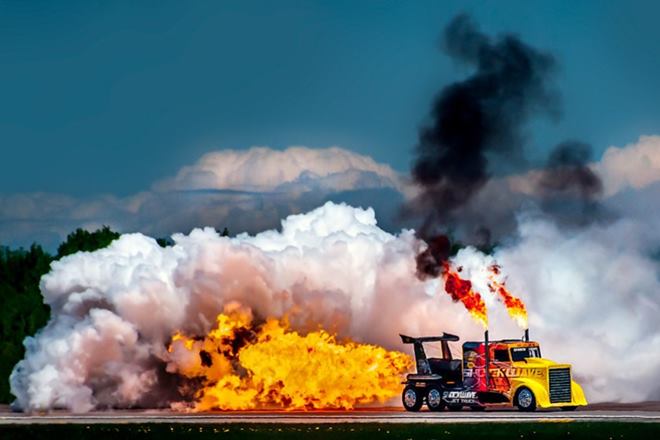 It is quite a petulant form of entertainment watching big trucks with jet engines at the back belching flames and smoke in the air. But in theory. You see something like this, and there’s no way you won’t be surprised or indulged or actually be entertained. Hence, we’re featuring ‘Shockwave’, which is one of the few ‘vehicle’ in the world that justifies its name – it is after all the fastest full-sized truck on this planet. The power comes from three jet engines. Three! Whoever came with the idea thought one or even two weren’t enough. Wonder if Jeremy Clarkson had anything to do with it.

The jet engines combined lend the Shockwave 36000 bhp to propel forwards, and it is smug about doing a quarter-mile in 6.63 seconds! Ahem, Ahem Bugattis and Henesseys..

With a capability to shoot to 601 km/h, Shockwave’s owner has got to be compelled to race it against something. But there isn’t much that can rival it on land, so Mr Shockwave had to look to the skies.

North American T-6 Texan to be precise. But the Texan has a top speed of 333 km/h, so there is no possible way it could beat the jet-truck in a conventional drag race. Hence it was allowed a flying start. Not just a simple flying start as Shockwave was stationary, the T-6 Texan did a flying start by diving from an altitude to rake up as much speed as possible.

Fasten your seatbelts! These are THE FASTEST CARS IN THE WORLD!

The video below showcases the race, but if you’re too anxious to find out the result – skip to 2 minutes 20 in the video. But who doesn’t want to see a jet-powered truck do its thing?

Shooting flames at the back, the Shockwave accelerated to about 552 km/h in what seems like the blink of an eye. Hippies and environmentalists will not be happy but it leaves behind clouds of pollution. But it is pretty much one of greatest races you’ll watch.