India now has it’s very first all-electric heavy-duty truck. It doesn’t come from Germany or Sweden though – it comes, in fact, from an Indian startup – Infraprime Logistics Technology (IPLT). And, the truck is already in commercial use. 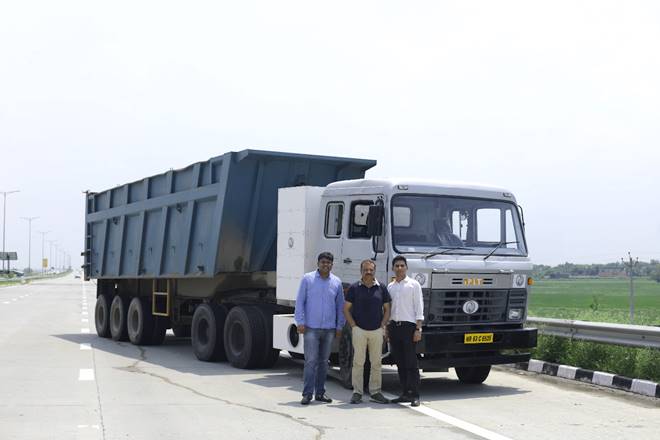 We didn’t see any teasers of it coming. We just saw it scampering along on the Eastern Peripheral Highway – India’s first-ever heavy-duty truck that uses an all-electric powertrain. And this, perhaps answers the question of whether it is ready for use yet – because it very well is. To find out more about the 60-tonne electric truck, we got into a conversation with the brains behind Infraprime’s eco-friendly truck and it turned out to be a very intriguing one indeed.

Tesla may have created a lot of buzz for its electric Semi trucks on the Internet, and it may be the first name that strikes to mind when speaking of electric heavy-duty trucks. But truth be told, others like Daimler and Volvo rolled out their own electric trucks for fleet tests first.

The truck is essentially a medium-haul logistics vehicle for transporting, for example, aggregates from mines for construction sites, cement companies, etc. The claimed range between charges is 400 km (without payload) and 200 km (with load). It can handle a 20-degree gradient, which is higher than diesel trucks.

A major concern with battery vehicles is rise in battery pack temperatures, for which the IPLT electric truck has been equipped with a sophisticated battery cooling system. The system uses liquid refrigerant, which is in contact not with the battery pack but with each of the cells.

The system maintains the temperature of the battery pack at 35 C. Moreover, Das explained that the truck uses lithium-ion phosphate battery which by design can not have thermal run away.

Launched on 1 August, the IPLT electric truck is currently not up for commercial sale and will only operate in transport fleets. The manufacturer plans to roll out five trucks in the next 1.5 months and produce 50-60 trucks per month starting January 2020 from its plant in Ghaziabad.

Infraprime says that they have already received a positive response from fleet operators which have expressed interest in including the new electric hauler in their fleet. Das further explained to us that the cost per km of IPLT electric truck will be about Rs 10/km, which in comparison to a diesel truck’s Rs 30/km is substantially low. Add to this lower EV tax and low cost of maintenance, an electric truck can deliver a profit margin about three times higher than a diesel counterpart.

One IPLT truck is already in commercial operation delivering to Infraprime’s to clients in Ghaziabad. The manufacturer says it wants to expand on concentrated routes which currently have 500 trucks operating in the next six-eight months

No plausible reason why we need to do this comparison – Tesla does not sell the Semi in India or anywhere in the world for now. But it sure places some perspective on electric trucks. Firstly, Tesla Semi is a 35-tonne truck and IPLT is a 60-tonne with a two-speed AMT.

Tesla boss Elon Musk claims that the Semi-truck will be capable of 0-100 km/h sprint time of 10 seconds (unladen). IPLT, on the other hand, says they aren’t interested in 0-100 km/h times and would focus more on the function intended for the truck.

And secondly, a Tesla Semi would cost about Rs 2 crore and IPLT is priced about 1/3rd of it and 1/4th of the value of similar products.

IPLT aims to be the largest truck manufacturer and operator in the world by June-July 2020 and also says that it could be the first in the world to design, develop and deploy a new electric product within the shortest time in the world.

The manufacturer will expand the truck’s reach to various routes one by one and install one electric charger at the loading point for its trucks and one at the entry into the city they are destined to.

IPLT’s 160 kWh charger can charge a truck’s battery pack from 0 to 100% in 90 minutes. Das also says that it can charge EV’s in the passenger vehicle category in sub-five to eight minutes (if all parameters are met – power source kWh, socket, AC/DC input/output, etc)

One of the objectives of IPLT is to bring down the cost of infrastructure development in the country. Chetan Singhal explained that the infrastructure development cost escalation happens primarily due to construction material not reaching in time. And that is where IPLT electric trucks can ensure efficient construction material logistics with lower chances of breakdown by a large margin and a higher profitability index per km.