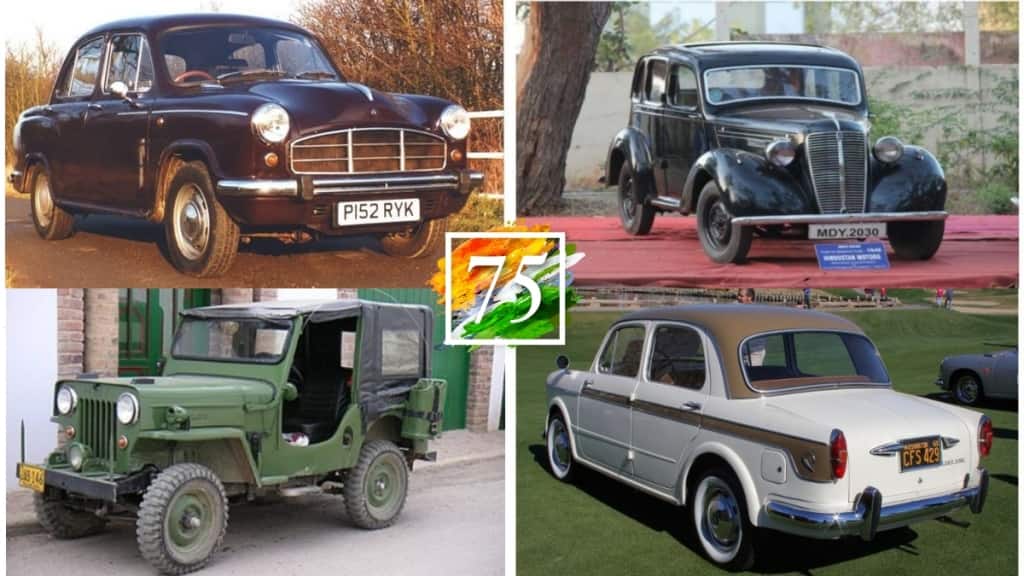 The 75th Independence Day marks many milestones in India after winning freedom in 1947. The country, as a whole, has progressed a lot,— its businesses, industries and various other sectors — including the automotive Industry.

In the last 75 years, the Indian automotive industry has grown multiple folds to becoming one of the largest in the world. From assembling vehicles to manufacturing and exporting, the industry and technology have seen major advancements, however, we cannot forget the humble beginning.

Here is the list of iconic cars manufactured in India since our independence in 1947, broken down into segments — from the first-ever Hindustan 10 to the latest EV and five-star rated vehicles.

Hindustan Motors (HML) was the largest automobile company in India before Maruti Udyog (now Maruti Suzuki) was established. HML was established long before Independence, in 1942, however, the first car to roll out after independence was the Hindustan 10, based on the Morris 10, in 1948. The Hindustan 10 was powered by a 37 bhp 1148 cc engine — pretty advanced for its time.

At the time, HML’s closest competitor was Premier Auto (PAL), which was founded in 1903. During its early years, PAL had Chrysler Corporation’s licence to build Plymouth and Dodge trucks. In 1949, PAL started assembling the cars and subsequently making the parts as well.

The company started making the CJ3 in 1954 in India under license from Willys and the rest, as we know it, is history! Today, Mahindra is one of the leading SUV manufacturers in India, even exporting some of its models to the US, which we will discuss more later.

The Ambassador is an iconic name in India, first produced in 1957 and went on till 2014. The Ambassador was based on the Oxford Morris Series and was manufactured at the company’s plant in Uttarpara, West Bengal. HML bought the rights from Morris in 1956 and the 1957 models came with an Austin Motors sourced 1476 cc side-valve petrol engine and were later updated to a 1489 cc, 55 bhp overhead-valve motor.

Over the years, the Hindustan Ambassador saw many iterations, including models powered by Isuzu engines. The car was also customised by many enthusiasts, including DC designs.

Also an iconic car, the Fiat 1100 was initially imported and sold by PAL, and in 1962, the 1100 D was introduced, giving the Ambassador customers a sporty alternative. The car was sold as an Estate or Family car version and a Deluxe model as well, which offered more performance — 49 bhp. The Fiat 1100 continued to sell in India until 1966 without major changes and many iterations were launched over the years until the plugs were pulled in 2000.