The Hyundai Santro has been discontinued in India once again. Here’s the backstory of India’s first and one of the most popular ‘Tall Boy’ family cars that have been ruling the hearts since 1998. 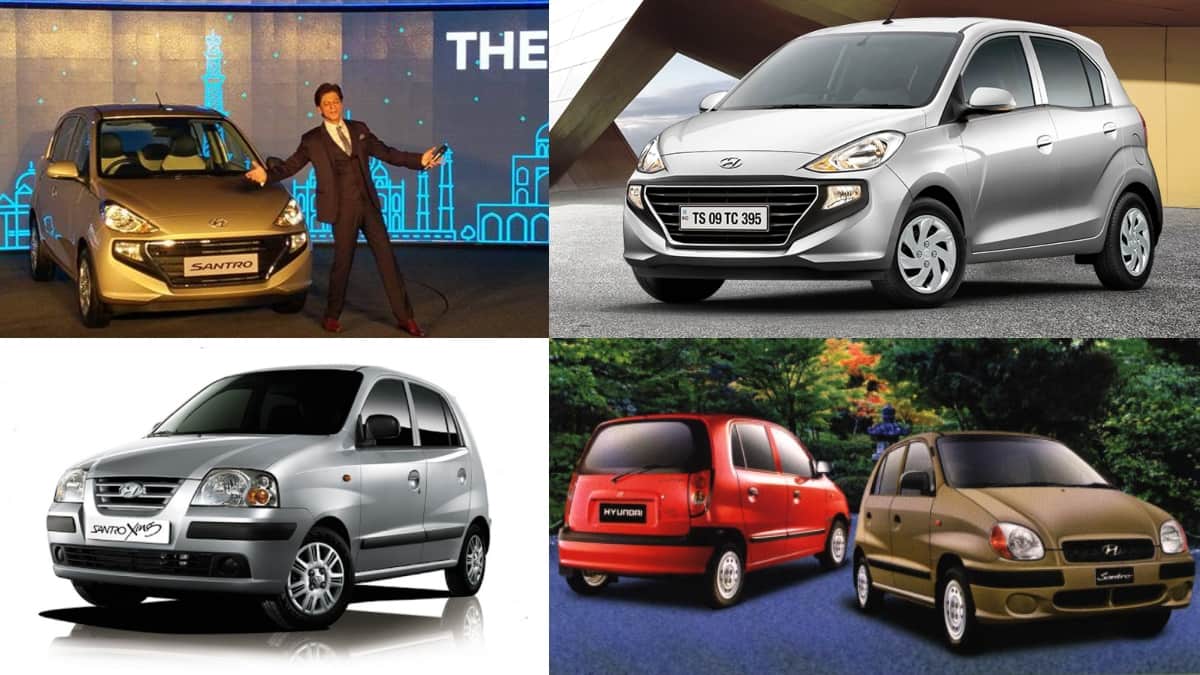 Hyundai Santro is a well-known name in the Indian market. This family car was first introduced in September 1998 and it became instantly popular, thanks to its tall boy design, spacious cabin, and powerful engine. Moreover, the South Korean carmaker roped in the Bollywood superstar Shah Rukh Khan as its brand ambassador. This move helped in popularising the Hyundai Santro and it became a household name in the country.

Over the years, the Santro received several updates and after discontinuing the first-gen model in 2014, the company brought its second-generation version in 2018. While initially, the new-gen Santro garnered a good response from the market, over the years, its sales have declined. So, now the Hyundai Santro has been discontinued once again! Here’s the backstory of India’s first and one of the most popular ‘Tall Boy’ family cars that have been ruling the hearts since 1998.

Hyundai Santro was first showcased in India at the 1998 Delhi Auto Expo. The company started its local production at Hyundai’s Sriperumbudur plant near Chennai in Tamil Nadu. This tall-boy family hatch was officially launched in India on September 23, 1998, at an introductory starting price of Rs 2.99 lakh, ex-showroom. In the initial two years, around 60,000 units of the Hyundai Santro were sold in India per annum.

Buoyed by the phenomenal response to the original Santro, the company launched the Hyundai Santro Xing in India in 2003. It received several cosmetic updates along with a bunch of new features and an updated powertrain. Powering the Santro Xing was a 1.1-litre petrol engine that developed 62 hp of power and 96 Nm of peak torque. To celebrate the success of the Hyundai Santro Xing, the company also introduced its various limited-edition variants sporadically.

The production and sales of the first-generation Hyundai Santro were terminated in December 2014 while this small family hatchback was officially discontinued in January 2015 after a good marathon run of 17 years. This was done to make way for the newer models like the Hyundai Eon, i10, and the Elite i20.

After almost four years of hiatus, the Santro made a comeback in India in October 2018. The second-generation Hyundai Santro was a complete departure from its predecessor. However, it still featured a tall-boy design and was introduced as an entry-level car in the company’s portfolio. The 2018 Hyundai Santro was offered with a 67 hp 1.1-litre petrol engine and it was available with a factory-fitted CNG kit as well.

Initially, it garnered a good response from the market but over the years, its sales have declined and now the company has decided to pull the plug on the Santro once again. The last recorded price of the Hyundai Santro ranged between Rs 4.90 lakh – Rs 6.42 lakh, ex-showroom. Will the company revive the Santro nameplate in the future? That will remain a question mark for now! Needless to say, the Santro has played an important role in Hyundai’s and India’s automotive history.

Will you miss the Hyundai Santro? Do let us know in the comments section below! Stay tuned with Express Drives for more updates and also, do subscribe to our YouTube channel for the latest auto news and reviews.