The Creta petrol automatic could be priced at least Rs 1.5 lakh lower than diesel automatic 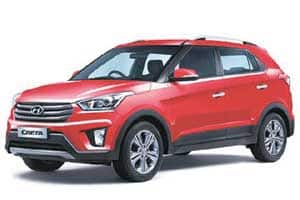 So confident Hyundai is about the prospects of petrol automatic that it has claimed automatics will soon account for 30% of total Creta sales.

The Creta comes in three petrol-engine variants and seven diesel-engine variants. While nine of these have manual gearboxes, the 6-speed automatic is offered only in the 1.6-litre SX+ variant. Surprisingly, this single variant has clocked sales of over 11,000 units (18%). Buoyed by the success of this diesel automatic, Hyundai is considering launching the Creta petrol automatic very soon, which will likely be priced R1.5 lakh cheaper than diesel automatic.

“There is an open space for introducing an automatic transmission in petrol in the Creta … we have got strong inputs from our dealer partners and there are considerable enquiries for a petrol automatic,” said a Hyundai spokesperson.

With the introduction of the automatic petrol variant, the company expects automatics to account for 30% of Creta sales.

“Similarly, we are also looking at introducing the Elite i20 automatic in petrol,” the spokesperson added. The Elite i20 was launched in August 2014 and has clocked sales of about 1.8 lakh units. Apart from the entry-level Eon, the Elite i20 is the only Hyundai car that doesn’t have an automatic variant.

Unlike Maruti Suzuki, Tata Motors and a few others, Hyundai, however, is not looking at the AMT (automated manual transmission) technology as of now. “For us, AMT is a transient technology. As of now, we would like to continue with two gearbox options—manual and fully-automatic,” the spokesperson added.